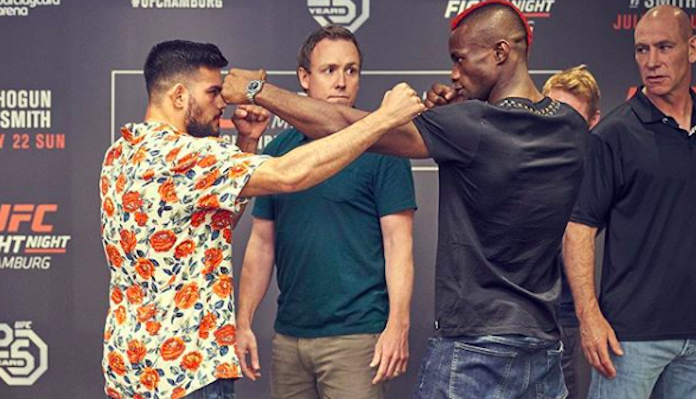 The first bout of the UFC Hamburg main card, which aired on Fox Sports 1 on Sunday afternoon, occurred in the lightweight division, where England’s Marc Diakiese collided with Hamburg, Germany’s own Nasrat Haqparast.

Round one unfurled entirely on the feet, where Haqparast worked to navigate Diakiese’s significant reach advantage. Though he was able to land some nice shots in close, he also absorbed some punishing offense from Diakiese.

This trend continued in the early phases of the second round, as Haqparast continued to press forward, seeking a home for his right hand, and Diakiese back-peddled, uncorking a few nice combinations off the back foot. As the round neared its conclusion, however, the Hamburg hero wobbled his British foe with a huge punch. From there, he dropped him with a followup punch, and very nearly finished him with a volley of ground strikes. Yet despite this onslaught, Diakiese managed to survive until the bell.

Haqparast rocks Diakiese at the end of round 2! That was close to being stopped! #UFCHamburg pic.twitter.com/VzCD1zmE8G

When the third round began, Diakiese’s right eye had nearly swollen shut. Sensing that his foe was fading, Haqparast began to turn up the pressure, charging in with big punches and ultimately dropping his foe again. When the pair returned to the feet, Haqparast spent the remainder of the round controlling the action in the striking department, keeping his foe on his back foot and continuing to land heavy artillery.

By the time the final horn sounded, there could be no other result than a unanimous decision victory for Hamburg’s own Nasrat Haqparast.