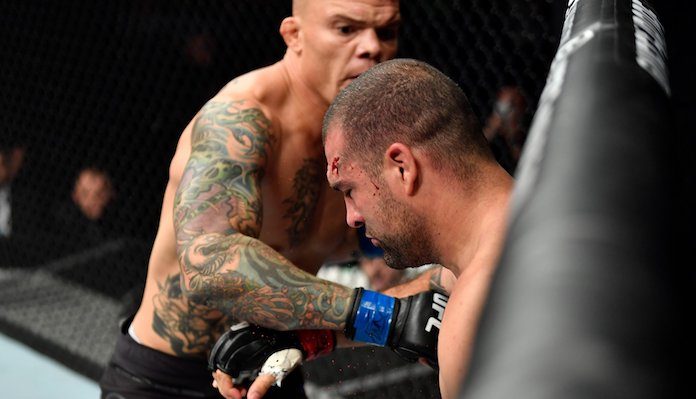 On Sunday afternoon, in the main event of UFC Hamburg, former middleweight contender Anthony Smith took his second fight in the UFC light heavyweight division. This fight, which followed a first-round slaughter of former champ Rashad Evans in June, saw him step in to replace Volkan Oezdemir against another former champ in Mauricio “Shogun” Rua.

After rocking Shogun with a front kick in the first round, Smith cranked up the offense. Moments later, he was walking his legendary foe down, shelling him with a hellacious series of punches and elbows. Suddenly, Shogun was out light a light — propped up against the cage, in the standing position, like a mannequin in a shop window.

Smith then generated even more buzz for himself by calling for a UFC 227 fight with Alexander Gustafsson.

Unsurprisingly, this massive knockout win and the Gustafsson callout that followed it generated some interesting reactions from the MMA community. Without further ado, here are some of the best reactions to Anthony Smith’s epic UFC Hamburg drubbing of Mauricio “Shogun” Rua.

Now That’s a callout!!! I like this guy #UFChamburg

Out cold on his feet!! #ufchamburg

Dammit! Nothing against Anthony Smith, I’ve just always rooted for the OG Shogun.

That was phenomenal. Give that man the Gus fight right now. Did just what he said he would. Incredible. #UFCHamburg. #UFC227

This Smith fella is something else. #UFCHamburg

Anthony ‘Lionheart’ Smith! Had to eat one there to get it done but it ends up a brutal, first-round KO of Shogun Rua to announce himself as light heavyweight contender. If you know the man, the backstory + the fighter, = easy to be happy for @lionheartsmith.

Damn that was quick! #UFCHamburg

What was your reaction to Anthony Smith’s destruction of Shogun in the UFC Hamburg main event?