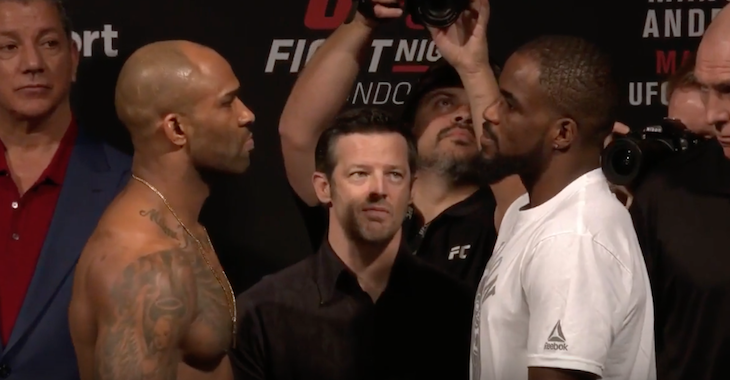 After a bit of a feeling out process, “The Poster Boy” was able to connect with a huge left hand that sent Corey Anderson crashing to the floor midway through the fights opening round.

Here is how the pros reacted to Jimi Manuwa’s sensational one punch knockout victory over Corey Anderson:

JESUS! That is some scary power. Didn't even load up. I hope Anderson is ok. #UFCLondon

Shit man. I thought Corey was gonna get him down a few times & diminish that power a bit. Feinted the hook low & came over the top perfectly

Wow Jimi is no joke

"You win some, you lose some, but you live to fight another day". I smile in victory and I'll smile in defeat. Bc the Lord has blessed me.

Who would you like to see Jimi Manuwa fight next his next octagon appearance? Sound off PENN Nation! Check out the full play-by-play from the UFC Fight Night 107 Corey Anderson vs. Jimi Manuwa main event below.

Round one begins and the fighters touch gloves. Manuwa takes the center of the octagon. Anderson is circling on the outside and lands a low kick to start. He shoots in for a takedown attempt but Jimi is not allowing it. Manuwa with a beautiful left hook to the body of Corey. Anderson pushes forward with a jab but then opts to circle out of the pocket. Manuwau with a low kick but Anderson fires back with a combination. Manuwau with a nice kick to the body but Anderson shoots in for a takedown. It is not there. He circles away from Manuwa but then comes forward with another takedown attempt. Once again Jim defends the shot. Manuwau with a hard left jab that sends Anderson to a knee. Anderson gets back up and circles out. Manuwa presses forward and lands a left hand that absolutely floors Anderson. This one is over! Walk off KO for “The Poster Boy”.