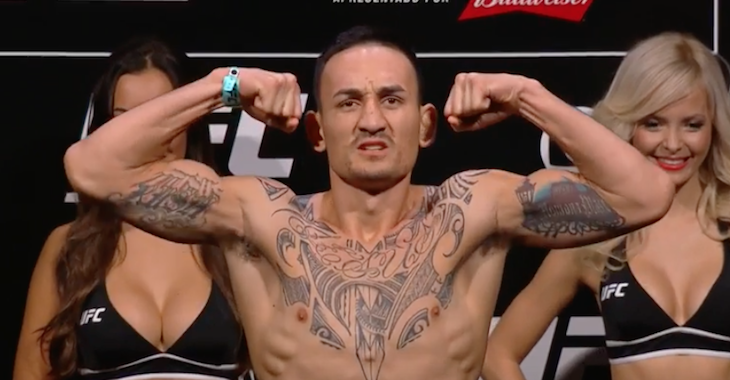 Round one begins and Aldo takes the center of the octagon. Max paws with a jab and then sends a shot to the body of Aldo. Holloway presses forward with a combination but Aldo avoids the attempted strikes. Jose goes to the body with a left hand. Max circles out and then lands a right hand. Aldo with a crisp right hand in return. Max presses forward and they briefly clinch. Aldo lands a big right hand after they break. He scores another and then a combination. Holloway is stunned. Aldo with a knee and then another right hand. Max circles off the fence and appears to be ok. Holloway takes the center of the octagon and lands a right hand. Aldo responds with a left and then avoids some attempted counters from Holloway. Another good left scores for Aldo. He is on point tonight. Jose lands a leaping left hook and then a leg kick. Max scores with a spinning back kick to close out round one.

And now @BlessedMMA is taunting Aldo! What a fight through two rounds!! #UFC212 pic.twitter.com/GfEz1ZfAKh

Round three begins and Aldo lands a hard right low kick. Max presses forward and paws with his left jab. He connects with one and then Aldo returns fire with one of his own. Max with a nice right hand and then another. Aldo counters with a heavy left hook. He misses with a follow up right. Max with a big left hand. This fight is getting good. The fighters briefly clinch and Aldo lands a knee. Both fighters connect with jabs. Max Holloway drops Aldo with a right hand. Max leaps in to full mount. He begins raining down punches. Aldo gets back to half guard but he is hurt bad. A couple of huge right hands from the Hawaiian. This is close to being stopped. Aldo gives up his back and Max looks to lock in the choke. 90 seconds remain. Holloway is back in mount and dropping bombs. Max continues to rain down blows and this is all over! And NEW!