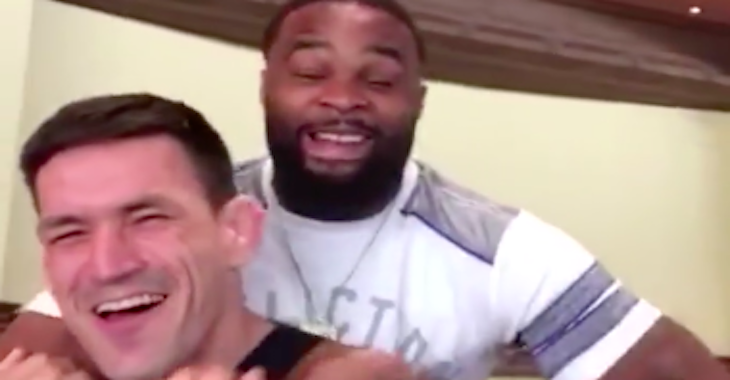 Earlier this week, rumors surfaced that Woodley would be taking on dangerous welterweight star Jorge Masvidal, as the welterweight division’s number one contender Demian Maia was apparently dealing with an injury.

Shortly after Maia took to social media to assure he is not actually injured, Damon Martin of Fox Sports has reported that a fight between Maia and Woodley is indeed happening. Apparently, the champ is hoping to make this title defense at UFC 214, and is just waiting for Maia to accept that date.

Have been reading a lot of crazy rumors today.To make it clear:
I’m not injured,have no serious injury whatsoever and didn’t tell @UFC that.

Tyron Woodley vs. Demian Maia is happening. Tyron wants it on UFC 214, just waiting on Demian Maia to accept that date#UFC

UFC 214 will occur in Anaheim, California, on August 29. The card will be headlined by a light heavyweight title showdown between divisional king Daniel Cormier and former champ Jon Jones. The card is also expected to include the first UFC title fight of featherweight dynamo Cris “Cyborg” Justino, though the UFC’s adding a welterweight title fight to the bill seems to cast some doubt on this possibility. It is unlikely, after all, that the promotion stacks the UFC 214 deck with three undisputed title fights.

Woodley was last seen in action in March, when he settled a November draw with Stephen “Wonderboy” Thompson with a majority decision win. Maia, meanwhile, confirmed his number-one-contender status in May, when he scored a split decision win over Jorge Masvidal.

Who do you think wins this reported Tyron Woodley vs. Demian Maia welterweight title fight? Can Maia pull off the win?