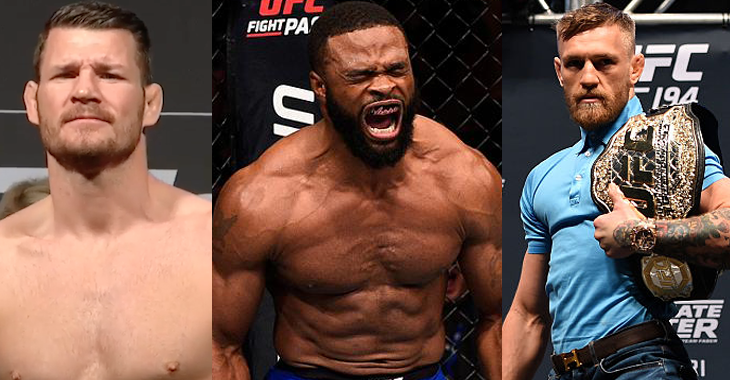 Fans of UFC welterweight champion Tyron Woodley are anxiously awaiting to hear what will be next for “The Chosen One.”

With there being a few options that the UFC has to put together to take on the king of the welterweight division in the Octagon next, Woodley is looking to build on his legacy with some dream matchups including both the champions in the weight classes surrounding him at 170. Interestingly, we saw Michael Bisping and Woodley post a video on social media recently with the two verbally arranging a date and weight for a fight. Nothing has been announced by the UFC yet on any fight between Woodley and Bisping.

Although looking to build his name in the sport and establish himself as one of the greatest to ever compete, Woodley does admit that the top contenders in the welterweight division also deserve their shot as well.

“And we are forgetting about Demian Maia. Poor old Demian Maia. You know from a #1 contender standpoint then sure it probably should be Stephen Thompson again or Demian Maia next. But I am not going to sit back and watch all of these fights happen that are great legacy fights and great financial fights without being a part of it. So the Maia and Thompson fights are probably on the bottom of my wish list. Georges St-Pierre would obviously be my number one fight. Number two would be Conor McGregor. After that, it would probably be Nick Diaz. After that, it would be Michael Bisping. Then those two guys would come after that.”

What dream matchup would you like to see for Tyron Woodley? Sound off in the comment section!