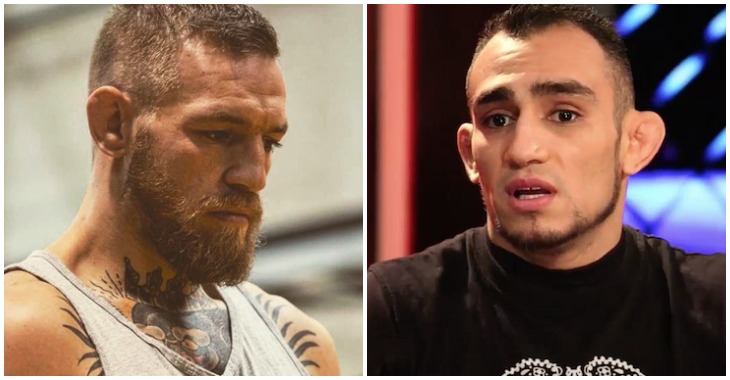 UFC lightweight champion Conor McGregor is currently transfixed on a potential boxing mega fight with recently un-retired great Floyd Mayweather. And though this fight initially looked like a downright impossibility, it is starting to look like a real possibility – even a likelihood.

If McGregor does end up competing in a boxing match with Mayweather, it’ll be a huge moment for combat sports, and an exciting moment for the fans. It will also be a frustrating moment for Tony Ferguson who, having won nine-straight fights, has more than earned a shot at the lightweight title McGregor currently holds.

On a recent episode of The MMA Hour, Ferguson weighed in on this possibility with host Ariel Helwani, assuring that McGregor has no chance in a boxing match against Mayweather.

Ferguson then continued on the topic, suggesting that one of the reasons McGregor is so desirous of a boxing match with Mayweather is because he’s keen to avoid a fight with him.

“That dude doesn’t want to fight me directly,” Ferguson said. “Conor knows exactly what he’s up against, and he knows I’m a force to be reckoned with. He can’t talk his way through this one. And the same thing with Nate [Diaz]. It’s a different scale with me.”

Ferguson then wrapped up by suggesting that, if McGregor is really focused on this potential boxing showdown with Mayweather, he should vacate the UFC lightweight title to allow the division to continue to evolve.

“No, I mean if he’s all about business and being a punk he needs to vacate that belt but, I don’t know,” he said. “If you want to box, let’s go. I’ll box you. That dude would get eaten up on his feet.”

What do you think of Tony Ferguson’s assessment of a McGregor vs. Mayweather fight? Sound off, PENN Nation!