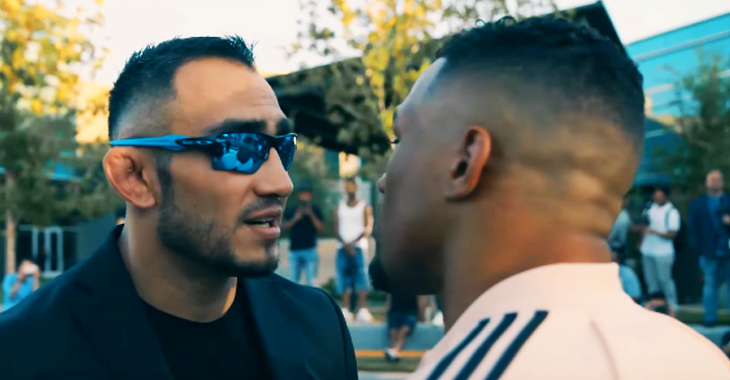 The interim UFC lightweight title is up for grabs just a few weekends away at UFC 216, which is why trash talk between Tony Ferguson and Kevin Lee has been reaching a boiling point. Profanity has been flying around like the kicks and punches will be on October 7th. Lee is confident he is going to expletive Ferguson’s expletives, but El Cucuy hopes those aren’t just empty promises, but that Lee has actually prepared for the war he expects.

“Pressure [is how I beat Kevin Lee]. I make him quit. I test his conditioning. Hit him in the stomach. Make him piss blood. He said,’I’m gonna’ f-ck you up,’ but I didn’t hear not one thing saying he was going to be physical, or he’s training for it, or doing all these different things to prepare for that.”

“So, if you’re talking all that sh-t, and you’re doing all these interviews, and you’re not doing all that, then you’ve got a f-ckin’ problem, kid. ‘Cause now you’ve got me pissed me off, but I’m not gonna’ fight with anger, bro. I’m gonna’ be smiling inside there and you’re gonna’ be like, ‘Why isn’t this guy getting angry,’ because I did all my pissed off stuff hitting bags preparing for your b-tch ass.” — Tony Ferguson speaking to MMA Latest.

After two failed bouts with Khabib Nurmagomedov, it’s easy to see if Tony Ferguson want’s to release his frustrations on Kevin Lee. On the contrary, Ferguson claims he’s gets his anger out in his secluded Big Bear gym he built with his own hands. Both fighters are on impressive win streaks and there’s more than just a title at stake. At some point, Conor McGregor is supposed to be coming back and even though he’s rumored to fight Nate Diaz, he’s still the owner of that lightweight title. Whoever walks out with the interim lightweight strap could redeem it for a chance at the biggest fight of their lives.