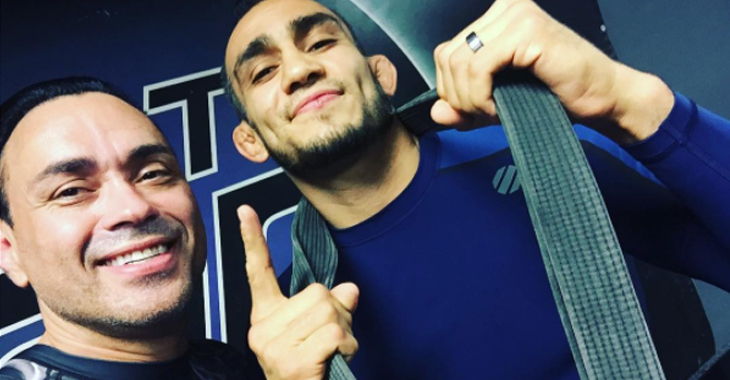 Just a couple of weeks ago, Tony Ferguson reached the peak of his career so far by winning the interim UFC lightweight title. He perplexed us with his talk, his training methods, and his perpetual-shade wearing. Ferguson tried to convince us he is on a different level, something that he proved at UFC 216. If finally having a world title around his waist wasn’t enough, Eddie Bravo just presented him with the highest honor he could give anyone: A 10th Planet black belt. It wasn’t just something Bravo ordered from the internet though, this belt is truly one of a kind. “The day I got back to Jean Jacques Academy after 2003 ADCC, he gave me the black belt off his waist. Tonight I gave it to Tony Ferguson.” – Eddie Bravo from his official Instagram.

You have to go back 14 years to talk about what this black belt that Eddie Bravo gave Tony Ferguson means. Back then, Bravo was basically an unknown brown belt trying to make a name on the jiu jitsu scene. He met the legend Royler Gracie in the quarter finals of the ADCC in 2003. He wasn’t supposed to have a shot at all, but Bravo did the unthinkable and submitted the Gracie with a triangle choke. Eddie Bravo didn’t win the tournament, but it didn’t matter. Tapping Royler Gracie was enough to launch his entire career. In a lot of ways, it was the beginning of 10th Planet Jiu Jitsu.

After this incredible performance, his instructor Jean Jacques Machado took his own belt off his waist and promoted Bravo to black belt. Yesterday, as Tony Ferguson returned to 10th Planet with the UFC title, Eddie Bravo awarded Ferguson with that very same belt. What an incredible gesture and a special promotion for Tony Ferguson, who has had an amazing ride so far and is just really getting started.