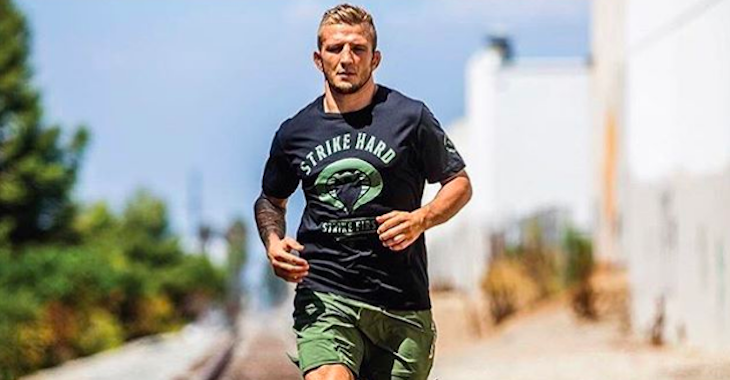 Before Dillashaw faces the monumental task of unseating Johnson, however, he would have to make the flyweight division’s 125-pound limit – a feat many people seem to be skeptical he’s capable of.

Though Dillashaw has claimed repeatedly that he could cut to flyweight with adequate preparation, he’s now shared some photos that he hopes will prove he can pull off the weight class drop. The first of these pictures shows Dillashaw, absolutely shredded, the night before his recent title win over Cody Garbrandt. The second photo, which was taken yesterday, shows him teetering just above 145 pounds, which is pretty low given that he has no fight booked.

This first picture is the night before I won back my Bantamweight title. This second picture is me this morning without a fight booked WARNING: Feet may cause loss of appetite. I can make 135 easy and 125 without question. 2018 will be my year! Thanks to @vitagoods and the Body Analyzer, I’ve been able to manage my weight accurately and efficiently. Get yours at vitagoods.com/tjd for 60% off! #ChampChamp #littlefoot

In this post, Dillashaw echoes a sentiment he shared on a recent episode of BJ Penn Radio, during which he assured that he can successfully make flyweight if the proper science is employed.

“I’m fighting Demetrious Johnson, the pound-for-pound best in the world, so if I’m gonna go out there and prove to them I’m the best fighter, I’ve gotta give myself my best chance and that’s to make the weight the right way, very scientifically and be on top of my game.”

Do you think TJ Dillashaw can successfully cut to flyweight?