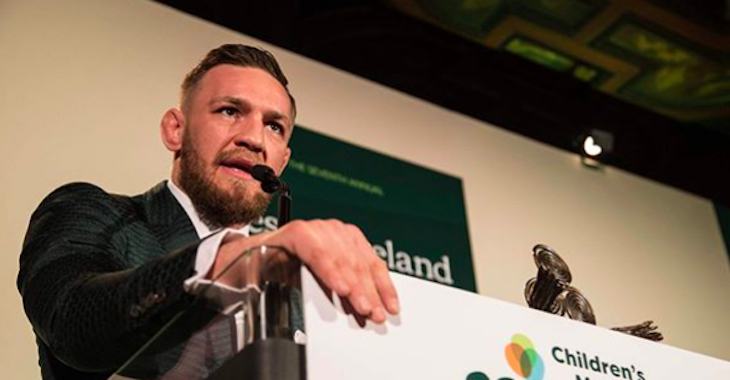 UFC lightweight champion Conor McGregor is not modest about the amount of money he’s made, or the lavish lifestyle it has afforded him. Interestingly, though, McGregor keeps quite quiet about the charitable work he does, and as it turns out, he does a lot.

Last night, McGregor attended the New York’s Children Medical Research Foundation 7th Annual Best of Ireland Gala in New York City, where he was honored for his substantial donations to the Our Ladies Children’s Hospital of Crumlin, in his native Dublin, Ireland.

Conor McGregor is in New York tonight. He’s being honored at the New York’s Children Medical Research Foundation 7th Annual Best of Ireland Gala dinner for the charitable work he does with children hospitals in Ireland.

Unlike other celebs, he doesn’t publicize his charitable work much, but I’ve been told he spends a lot of private time and resources to help sick children. His efforts are being recognized this evening.

Was told they normally raise about 600k. Tonight they broke 800k for first time. This included an on the spot generous donation from Conor after already donating. He’s not a bad kid 👏😊

Though his appearance at this New York gala flew almost entirely under the radar, McGregor did post to Instagram about the experience.

It was an honour to support Our Ladies Children’s Hospital of Crumlin at the 7th Annual ‘Best of Ireland Gala’ dinner in New York City tonight. Over $800k was raised for the hospital. Tonight alone. Amazing. The highest number of each previous gala. $800k plus thousand is truly a lot of money and everyone involved in this should be very proud. I look forward to hearing and seeing reports of where the money is put to use in the hospital. What a great night! Thank you @deedevlin1 @coach_kavanagh and @orlaghhunter for attending with me.