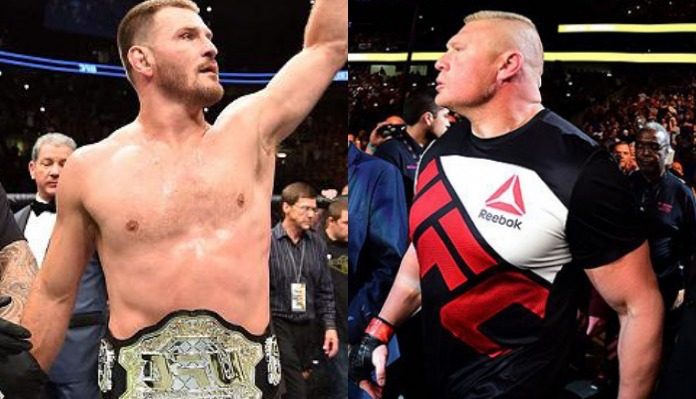 At present, UFC heavyweight champion Stipe Miocic has his crosshairs set on UFC light heavyweight champion Daniel Cormier, who he’ll battle in the main event of UFC 226 on July 7. As buzz surrounding the possible UFC return of WWE star Brock Lesnar continues to grow, however, Miocic is likely to get more and more questions about a potential matchup with the hulking former champion.

In a recent interview with Sports Illustrated, Miocic addressed a possible matchup with Lesnar. While Miocic gives Lesnar his due respect, he is extremely confident about his chances in this prospective showdown.

“Brock is a former champ and he knows how to bring it,” Miocic said (via The Mac Life) “He’s tough, he’s very strong and beaten a lot of good guys, but I am a bad match-up for him.”

Of course, at this point, the three-time defending champion Miocic feels he matches up well with pretty much everybody.

“I match up well with anyone,” added Miocic. “That has a lot to do with my coaches, teammates, and my training. I always have a good game plan walking in on the day of a fight. With Brock, I’d win, there’s no question. But right now, all I care about is fighting DC. That’s all I’m worried about.”

Since winning the UFC heavyweight title with a first-round knockout of Fabricio Werdum, Stipe Miocic has defending it with similarly impressive first-round knockouts of Alistair Overeem and Junior Dos Santos, and most recently, a decision win over the massively hyped Francis Ngannou.

How do you think a fight between Stipe Miocic and Brock Lesnar would go down? Is this a fight that interests you? Join the conversation in the comments section below.