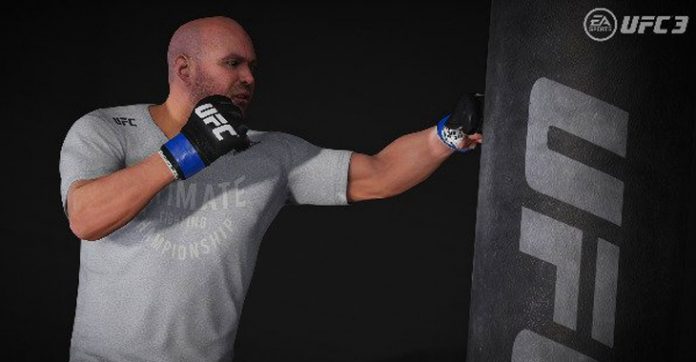 A new challenger has arrived. The light heavyweight division has been put on notice. The next hot prospect to wreak havoc in the UFC will be… president Dana White? That’s right, EA Sports UFC 3 will introduce Dana White as a playable character today. So, far any fan who wanted to punch him in the face, they finally get their chance. Or, you can rule your organization with an iron fist in a reign of terror as you beat up fighters that have done you wrong over the years.

“From what EA tells me, the fans have been asking for this for a long time. They asked me if I would be willing to do it and I said, ‘Yes, I think it’s great.’ It’s fun. And for all the people out there that have wanted to punch me in the face over the last 20 years, this is your chance. When I saw the video of me in the Octagon fighting for the first time it was hilarious because I was fighting Gian Villante. I called him on FaceTime and showed him the video of me whooping his ass. It was fun. I sent it to Chris Weidman and Matt Serra and we had a blast with it.”

Ever wanted to punch The Boss in the face? Well, here you go! Download @DanaWhite in #EAUFC3 NOW ➡https://t.co/qO3XgjCWDq pic.twitter.com/PJxrNAW8Gg

“When we decided on weight classes, we kept it real. I’m a 205-lber, so we put me in the light heavyweight division. But, if the fans like it and are into it, you could see me going into other weight classes, heavyweight and down, in the future. As far as the technique goes in the game, they modeled me after a boxer because I have boxing experience. But don’t be fooled, I have jiu-jitsu too, so don’t think that you’re going to take me to the ground and beat me up down there. My jiu-jitsu is actually pretty good, so you better be ready on your feet and on the ground.” — Dana White speaking to Game Informer.

Hopefully EA has more playable characters to release. There are a lot of prominent fighters on the roster that haven’t been put in the game yet, most of which running social media campaigns to get their likeness in the game. Joe Rogan still remains a secret character in the game, while you can download Dana White for free today to test him out in the light heavyweight division. Watch out, Daniel Cormier. He may ruin your chance of the Stipe Miocic superfight.