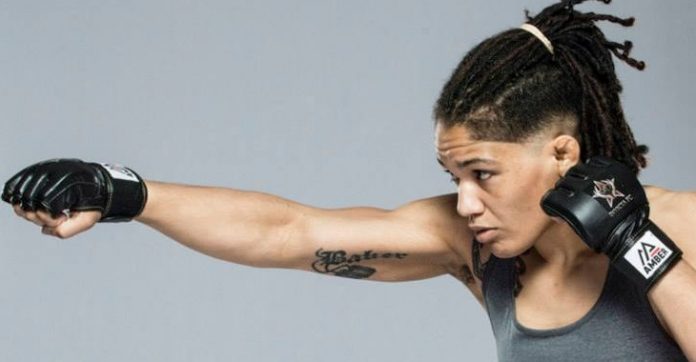 Believe it or not, Sijara Eubanks was supposed to be one half of MMA history. After competing and winning her way through season 26 of The Ultimate Fighter, ‘Sarge’ was all set to fight for the inaugural UFC women’s flyweight title against Nicco Montano.

Eubanks, essentially a career bantamweight with only one fight at 125-pounds prior to the season, had felt that this was her perfect opportunity to shine. And for the most part, it was.

The struggles throughout the season to make weight were there, but they didn’t prevent Eubanks from overcoming everyone that was put in front of her. But unfortunately, when it mattered most, she was unable to make the cut.

Eubanks was hospitalized the day of weigh-ins due to complications with her weight cut and was obviously unable to make it to the fight. Despite this, Eubanks was never questioning whether or not she would move back up to 135-pounds after the missing of weight as she told MMAJunkie, but she wasn’t so sure she would still be getting the initial title shot that she had earned.

“I had no doubt whatsoever [about fighting at flyweight]. In my mind I was like, ‘I want 125, this is the best division for me.’ I feel like I have some redemption I want to get at flyweight, just as far as the weight cut itself. But I wanted to do it in a safe and healthy manner, so I went out to the UFC Performance Institute [in Las Vegas] and I asked them straight up: ‘Can I make it in a healthy way?’ They said, ‘Absolutely.’ That’s all I needed. I’ve been focused. I’ve got a new nutrition plan, new condition plan and been focused on getting that together. This allowed me to be a better fighter because it put me in a place where I have to be more disciplined and more strategic in my weight management than I’ve ever been before. It makes me an even more dangerous fighter.

I definitely asked [for a title shot]. It’s not like I lost or anything, but I figured I was realistically going to have to take another fight before I was granted the title shot again. No problem. I don’t mind proving I can make the weight and I can be a more disciplined fighter in that area. Of course I was hoping for it. I saw Nicco she said she was hoping to fight me out of the gate. But everything happens for a reason. We are where we are and I’ll fight whoever I’ve got to fight.”

Murphy has been in the UFC since 2014 and has gone 2-3(2-4 including TUF) with some questionable decisions mixed in since making her debut. At the TUF 26 finale, Murphy defeated the longtime #1 ranked flyweight, Barb Honchak by split decision, giving her a big boost in a new division. Regardless, Eubanks doesn’t feel any less confident that she’ll walk away with the W.

“I’m going to finish Lauren for sure. There’s definitely a lot of holes, per se, in her game that we can take advantage of. It’s a really good matchup for me and I’m really excited to put on some fireworks. I’m determined to prove that I not only belong in this division but that I’m a force and a finisher in this division. It’s a lot less about Lauren and a lot more about me bringing my best self to the cage on June 1.”

As for the now champion that Eubanks didn’t get to fight, Nicco Montano, it looks all but clear that her first title defense will come against the former bantamweight title challenger, Valentina Shevchenko who very impressively debuted at 125 against Priscilla Cachoeira at UFC Belem. Sarge’s thoughts? Pretty similar to the rest of the MMA world’s:

“I think Valentina takes that one, for sure. I’ve got a lot of respect for Nicco, especially after she came out and said she would like to fight me for her first title defense. But I think from what I know watching Nicco fight in the house and from what I’ve seen out of Valentina at 125 and 135, I think Valentina’s a little more well rounded than Nicco is. Definitely a lot more experienced. I’m going to give it to Valentina if that fight comes through.”