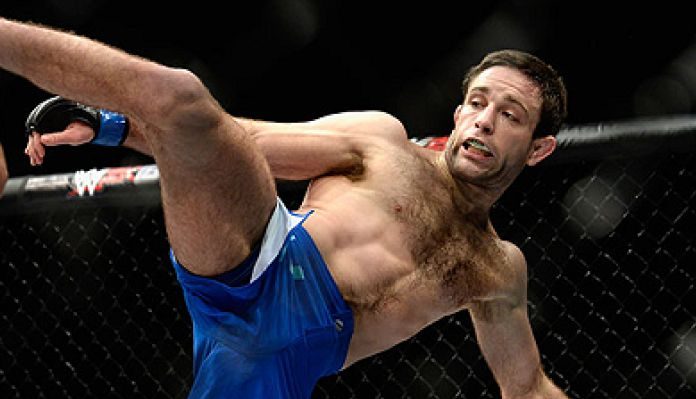 UFC Hall-of-Famer B.J. Penn will return to the Octagon for the first time since June of 2017 at December’s UFC 232 event in Las Vegas. Penn will be up against Ryan Hall, who won The Ultimate Fighter 22 and has not fought in the UFC since December 2016.

The fight will take place at 155-pounds (lightweight), meaning both Penn and Hall will be moving up from their most recent home of featherweight for this fight.

Ryan Hall has not fought in two years, which by all means was not his choice, as he explained in a recent interview.

“I’d say there was a series of things,” Hall said to Luke Thomas on The MMA Hour. “You mentioned that there’s the gym [that I run, Fifty/50 Martial Arts Academy]. There’s other things going in life, I’m trying to work on those as well. After fighting Gray, which I felt very fortunate for that opportunity — that was good, and I felt it was unorthodox but most definitely, by any metric, a dominant performance, similar to the fight against Artem — I was definitely looking forward to the opportunity to facing somebody tougher. But what it’s turned out to be is that a lot of the guys that are a little higher up the chain — and I’m not talking about way, way, way up there where I have no business even asking to compete with them — were very reticent to get into the ring, and that was a problem.”

Although Hall had stuff going in his life, many thought the TUF winner was simply turning down fights, which was not the case. Hall wanted to fight bigger names but everytime those fighters turned it down. But when the Penn offer came in, he knew he was accepting it.

“I expressed the interest to the matchmaker in the UFC, who’s never been anything but a gentleman to me, that I wanted to face very difficult and challenging opposition, and he said okay. He said, ‘I’ll let you know when that comes around,’ that a lot of those guys have turned down the fight,” added Hall. “So, no, I’ve not been spending my time turning down fights. Not a ton of offers have come in, but the ones that have, I’ve accepted wholeheartedly, and finally we got a good one. In B.J. Penn, you have someone who’s clearly not afraid of anyone. This guy fought up to heavyweight, he fought Lyoto Machida so I don’t think bravery is an issue in his case, and I will try to match that myself.”

The fight against a legend in Penn will be one that will surely end up on the ground as both Penn and Hall are two of the best grapplers in the game. It will be interesting to see which fighter proves to be better, but for Hall, no matter what he is just honoured to fight Penn.

“So as far as I’m concerned, I understand that other people have their position, but I have mine, and I feel very, very fortunate for the opponent that I have,” the 33-year-old added. “And I’m glad that, it took a while and it took a lot of waiting, but I’ve done my best to make good use of the time, so all things considered, I couldn’t be happier. I have a great fight.”

Who do you think will win the fight between Ryan Hall vs, B.J. Penn?