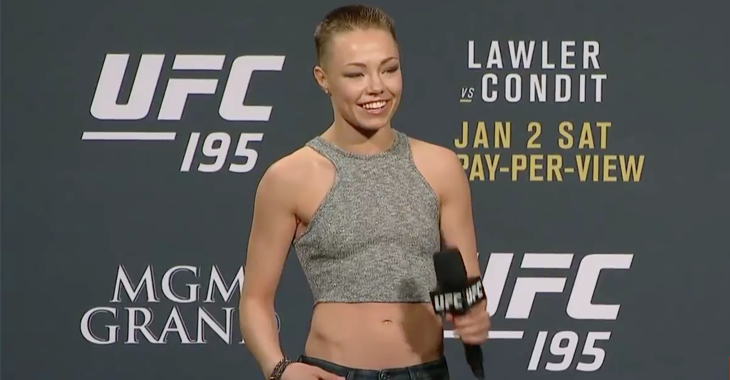 Back in November, in the first of three title fights on the UFC 217 bill, a widely unheralded Rose Namajunas shocked the world by drubbing Joanna Jedrzejczyk to a first-round knockout win.

Since then, the big question has been who Namajunas will fight in her first strawweight title defense.

Previously, she has expressed interested in “the scariest person,” Jessica Andrade.

“For me, [the question is] who is the scariest person that I could fight? I think that would be cool,” Namajunas recently told MMAFighting. “To me, what sticks out as of right now is Jessica Andrade, but at the same time a rematch with Joanna would be great too.”

Given that Andrade is now booked for a fight with fellow contender Tecia Torres, Namajunas seems to be leaning further and further in the direction of a rematch with Jedrzejczyk. “[It makes sense] for a different number of reasons,” Namajunas told MMAjunkie. “I think that’s definitely the fight that most people want to see, but I’m always open to fighting anyone. We’ll see.”

Namajunas also commented on Jedrzejczyk’s trash talk in the lead-up to their first fight. Apparently, it never got under her skin – and it wouldn’t a second time around, either.

“I never really took anything personal, even after the fact,” Namajunas said. “That’s just what she had to do. That was her best strategy to beat me, but it didn’t work, and it’s still not going to work.”

Since then, Namajunas has just been adjusting to life as a champion.

“I’ve definitely been continuing my mental growth and trying to map out what the next year is going to look like for me,” Namajunas said. “It’s been a transition period, basically.”

Who do you want to see Rose Namajunas take on in her first title defense?