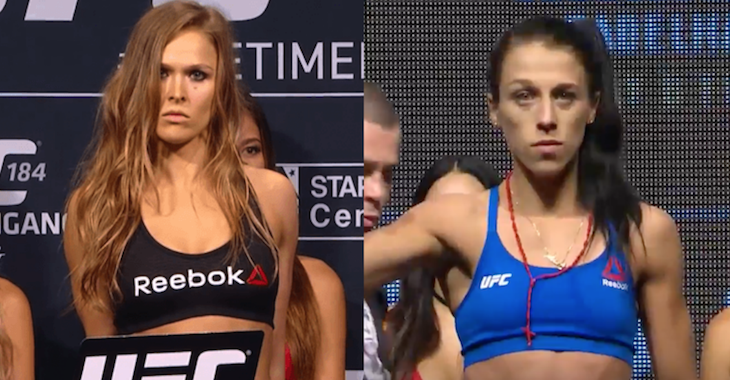 Earlier this month, UFC President Dana White revealed that former UFC women’s bantamweight champion Ronda Rousey would be making her return to the Octagon to fight Amanda Nunes in the main event of UFC 207 on December 30th.

In addition to the fight with Nunes, UFC President Dana White also revealed that if she emerges from UFC 207 victorious, she would have her highly anticipated superfight with Cris Cyborg, who is currently riding a 2-fight win streak in the UFC that most recently saw her TKO Lina Lansberg in the 2nd round of their ‘UFC Brasilia’ fight last month. “Why would Ronda, who walks around in the off-season at a healthy (148 to 152 pounds), why would she look to give such advantages to an athlete that walks around at 175 pounds?” he said. “No male on the planet would do such a thing, and I think it’s disrespectful and a double-standard for the public to assume Ronda should.”

“As Ronda’s weight-management coach, I see Ronda being a 125-pound athlete, if that weight class existed,” he said. “Based on her current body weight, and how compliant she’s been to her lifestyle, Ronda can make 125 pounds. That might be where the most exciting matchups would actually take place. Can you imagine Ronda versus (UFC women’s strawweight champion) Joanna Jedrzejczyk, who’s always talked about moving up to 125?”

Jedrzejczyk, who currently reigns as the undisputed women’s strawweight champion, has mentioned that she is interested in moving up to flyweight to become the first two division women’s champion.

Following the fight, there was an increased interest among fans and fighters regarding a women’s strawweight division, however there has been no official word on when, or if the UFC will pursue creating the division in the near future.