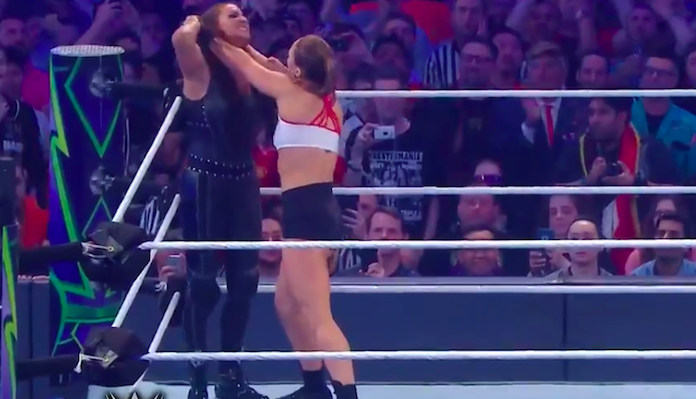 Leading up to her WrestleMania debut, Rousey had throngs of doubters and naysayers, who felt she was destined to disappoint in the squared circle. In the end, however, she silenced these doubters in the most emphatic way possible, performing with dazzling speed, athleticism and charisma throughout her match.

Unsurprisingly, many members of the MMA community tuned in to watch the former UFC women’s bantamweight champ do her thing in the ring. After the event, many of these fighters and pundits took to social media to share their thoughts on Rousey’s performance and congratulate her on her tremendous success.

Here are some of the best reactions to the former UFC champ’s WWE debut.

.@RondaRousey was amazing last night at #WrestleMania. People don’t understand how hard wrestling is and for her to step in and do as well as she did shows the type of athletes and athleticism we have in our sport. @QoSBaszler also looked great

I never watch wrestling but maybe I’ll watch when @RondaRousey is on.. it looked so fun! She brought a different energy to it all.. was fun to see! Bravo Ronda!!! 🔥🔥🔥

First time I’ve watched WWE in ages and @RondaRousey was unbelievable! Superstar power doesn’t even begin to describe it. https://t.co/OGifVLYuHh

On my way to my first LIVE @WWE since i was a kid to support the amazing @RondaRousey pic.twitter.com/B1rDpytIMW

Did you watch Ronda Rousey’s riveting WWE debut at WrestleMania 34 on Sunday night? If so, what did you think of her performance? Join the conversation in the comments section below!