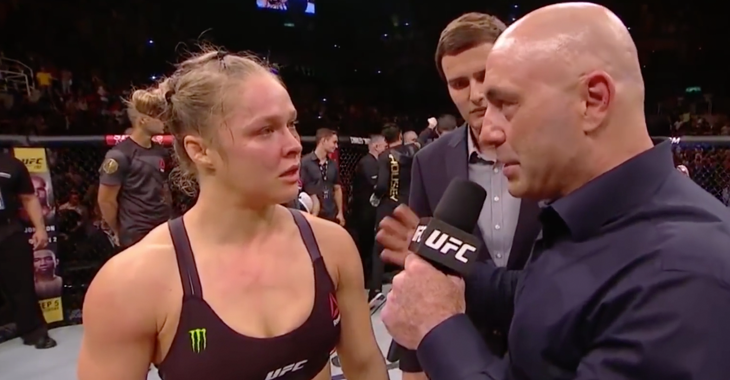 Former UFC women’s bantamweight champion Ronda Rousey has not fought since losing the belt to Holly Holm at UFC 193 back in November.

UFC color commentator Joe Rogan feels that Rousey got caught up in her fame, which ultimately led to her being knocked out by Holm.

“These themes play themselves out over and over again,” Rogan said on his “Joe Rogan Experience” podcast (transcribed by FOX Sports). “The traps are all there but everybody keeps going for the candy and they keep getting caught in the trap. The traps of Hollywood are always there for any superstar athlete, especially fighters and we’ve seen it all throughout history,” Rogan said.

“Anybody who looked at her fights could see Ronda Rousey was this fierce competitor, one of the best examples of judo we’ve ever seen in MMA. Her judo’s spectacular. There’s a reason why she’s a medalist in the Olympics. She’s a sensational competitor and her grappling’s outstanding and her arm bar technique is amongst the best in the world,” Rogan said about Rousey.

Rogan said that Rousey’s unbeatable character that was built up by herself and the media gave her too much confidence.

“But she’s knocking out these girls who are nowhere near world class as far as like kickboxing and striking is concerned. Holly Holm is 100-percent world class. She is an 18-time world-boxing champion. She’s a kickboxing champion. She was an MMA competitor for a couple of years before she got into the UFC and she was having these ridiculous head kick KO’s. She’s a beast and for (Ronda) to think she’s going to treat this Holly Holm woman the same way she was able to bully like Bethe Correia. Bethe Correia is slow and awkward and not that athletic.”

“The idea that you’re going to have the same approach that you used on Bethe Correia with someone like Holly Holm, that’s just madness,” Rogan said.