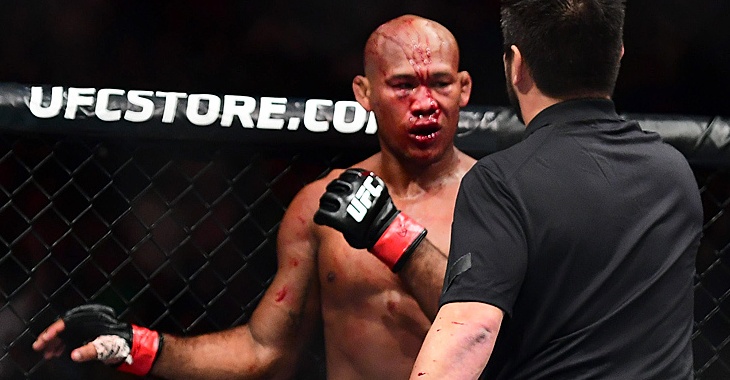 The last time we saw Brazil’s current best middleweight contender, Jacare Souza, he was on the receiving end of a rather astonishing upset loss. He took on the now champion, Robert Whittaker at UFC on Fox 24 last April and lost by second-round knockout. This was the first time Jacare had really ever been beaten in such a surprising and dominant fashion. After the fight, Jacare required surgery on a pectoral muscle that was a lingering issue prior to his fight before Whittaker against Tim Boetsch. Thus making the struggles all the more difficult as he told MMAFighting:

”I thought about stop fighting because it was a long surgery. When I came back to training, seven months later, my trainer asked me to run for 10 minutes, and I called him back, ‘Brother, I can’t even run for five minutes, it hurts so bad and I’m tired’ [laughs]. It was complicated for me to return. I was thinking about retirement. It was really hard,” he continued. “I thought about it for a while, it was too complicated. I had to undergo surgery many times. I had never suffered any injury throughout my career, was always healthy, and all of a sudden I had a lot of injuries. I said, ‘Man, I don’t want to go to the surgery table and go through all this again.’

Throughout my entire career, I thought about quitting many times,” he admits. “In jiu-jitsu, I thought about quitting almost every month because it was too hard for me. I was away from my family in Manaus, I was a world champion and didn’t even have money to catch a bus. But I thought that I’m still healthy, training well, so there’s no reason to stop. I still have gasoline to burn. I only lost to the champion, so I can fight at the high level. When I came back it was complicated because I was completely out of shape, fat, no timing. I couldn’t even run. It was hard.”

Jacare didn’t use the injury as an excuse though and even said that “He [Whittaker] won because he was better,”. In his next appearance, Jacare will rematch Derek Brunson in the main event for UFC on Fox 27. The two first met back in Strikeforce in 2012. Jacare got the better of Brunson as he TKO’d him in just forty-one seconds.

”He’s [Brunson] still saying the bunch of crap about me he said six years ago, and I will go there and annihilate him. That’s the plan. It hasn’t changed anything. If he comes with that chin high, screaming ‘punch me,’ it will end the same way. There’s no such thing as overconfidence, man. I’m experienced, I have a long career. I will go there and do my job, do everything I’m training.”

Fox 27 will take place in Brunson’s home state of North Carolina on January 27.