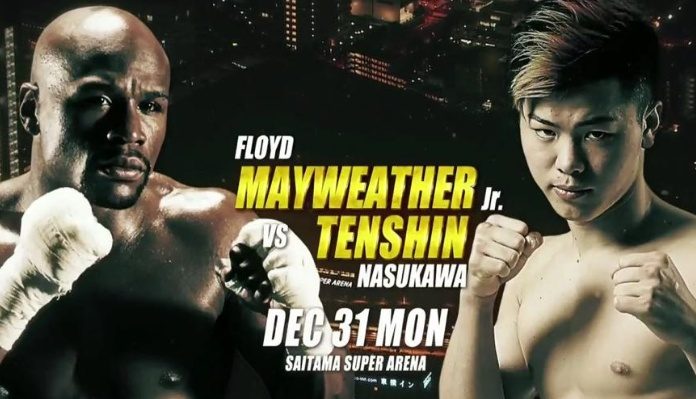 Every year since their existence, Rizin Fighting Federation has held their biggest events on New Year’s Eve. And after two already incredible shows with Rizin 11 and Rizin 13, it was going to take something massive to top those for the end of 2018.

To say they’re off to a good start in the building of this year’s card, Rizin 14, would be an understatement.

No one would have predicted that arguably the greatest boxer of all time would be returning to take on Japan’s current best striking sensation. And if you did, you’re probably psychic.

Two lengthy undefeated records, young prodigy vs experience and wise master. It’s a crazy combat sports world in 2018, check out how the MMA community reacted to the news.

I’ll absolutely win.
Cuz I born to change the world with this fist.
Who’s gonna fight together with me as Team Tenshin?
See you at RIZIN. #TeamTenshin#RIZIN14#Cygames#mayweathertenshin pic.twitter.com/ftg1AB1hgH

We have to be living in the strangest time in combat sports history.

Floyd Mayweather fighting in #Rizin might be the best thing in a decade to happen in #MMA, outside of UFC. People will know there's a MMA world that exists outside of the UFC. #grateful

I hope everyone realizes this fight will be about as LEGIT as Macho man vs The Ultimate warrior in a WWE match. #scripted 🙄 https://t.co/gfKSn0iNrb

I’m sure many of you combat sports fans have heard that @floydmayweather has signed to face @tenshin.nasukawa in Japan on New Years Eve. I don’t know what kind of “special rules” they’re supposed to be fighting under but I just like the fact that it’s going to happen and that people get to google Tenshin’s name and see some of his fights. He’s a true striking genius. I doubt Floyd is going to agree to any rules that allow Tenshin to kick, but if he does it could be a terrible night for him.
This kid is the truth.

Is that a tracksuit or a sauna suit Floyd haha wtf. is it hot in Tokyo or what’s the story here? that climate change is no joke f*ck me hahah
What in the f*ck is going on here? Who’s this little prick next to you ? That’s mad sh*t. Like something out of rush hour 5 or something. Chris tucker and Jackie f*cking Chan back in this bitch. F*cking brilliant. Mad little bastard you are Floyd. Fair f*cks to you mate. No lie. F*ck it.