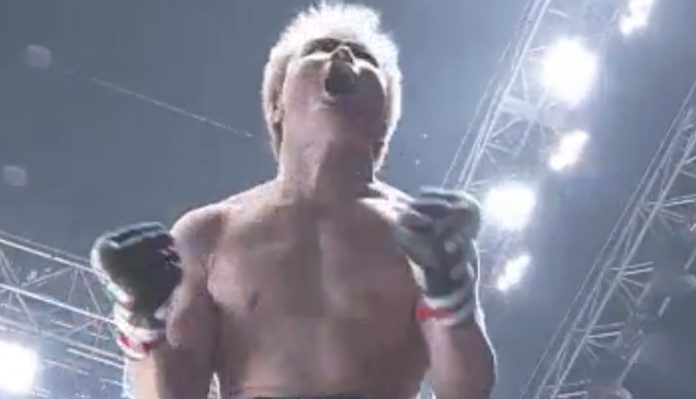 In a night that had already seen some great action produced by UFC on Fox 30 in Calgary, MMA continued in Japan and only further stepped on the gas.

The RIZIN Fighting Federation held their 11th numbered card just three hours or so after the conclusion of Dustin Poirier’s epic victory over Eddie Alvarez in their rematch. Right from the get-go, it was almost like the fighters were trying to top the UFC’s action. And they arguably did just that.

Starting the night off was a former UFC veteran in “The Detroit Superstar” Daron Cruickshank. Cruickshank took on the Brazilian, Tom Santos and had his way for the three-round affair.

Cruickshank would hurt Santos several times in the opening round with a soccer kick followed by some punches when Santos tried to recover. To his credit, he would survive until the third before Cruickshank found the mount and reigned down some nasty ground and pound elbows that forced Santos to tap.

The second fight of the night didn’t last long but it sure was incredible.

The two started out in an eager feeling out process desperate to engage when the moment was right. Once the 30-second mark struck, Topnoi got dropped by a short left from Yamamoto.

Yamamoto would chase Topnoi down as he tried to regroup only to find himself getting clipped and hurt. Topnoi backed Yamamoto into a corner only to find the kill shot and put his opponent away in one of the wildest 30-second sequences we’ve seen since…well…the LFA event that took place the other night.

30 seconds of pure chaos between "Topnoi" Thanongsaklek and Tadaaki Yamamoto. Topnoi obliterates him against the ropes #RIZIN11 pic.twitter.com/PmbNy1E3Yq

Cruickshank wasn’t the only UFC veteran competing at this event as The Ultimate Fighter season 14 featherweight winner Diego Brandao made his promotional debut.

And he did so in spectacular fashion.

Taking on the dangerous veteran Satoru Kitaoka, Brandao found himself immediately fending off takedowns just to wind up in an eventual heel hook attempt.

This would completely backfire for Kitaoka as Brandao dropped devasting bombs for punches onto Kitaoka’s face that quickly put him out.

Diego Brandão may have just committed a crime. #RIZIN11 pic.twitter.com/hg5GjNnwWR

In one of the highlighted bouts of the night, we had two more UFC veterans in lightweights Takanori Gomi and Melvin Guillard competing in a 160-pound catchweight clash.

Going into the fight, each man hadn’t won an MMA fight since 2014 and the two had a combined 13 losses between them (Guillard with seven, Gomi with six).

Both men being known for their wildly entertaining brawler styles in their primes, they turned back the clocks and went to war.

Throwing rather sloppily and repetitively with their wild shots, each would land effectively at moments in the opening round before Gomi would stumble awkwardly leading to Guillard chasing him and paying for it. Gomi would be the one to break his losing streak in his homeland.

After a somewhat surprisingly competitive first round seeing Ogikubo have success in the grappling department and even seemingly stunning Horiguchi on the feet at a point, it wouldn’t be enough.

The dominant former UFC flyweight title challenger would carry the late momentum from the first round into the second where he would take home the decision victory making it his 10th straight.

The main event saw one of Japan’s biggest stars searching for redemption as Rena Kubota looked to avenge the first and only loss of her professional combat sports career against Kanna Asakura.

The first fight didn’t last long as it was essentially a one round feeling out process on the feet with takedown attempts mixed in. Asakura would eventually find the big one that got her into position to sink in a rear naked choke that put Rena out.

In the highly anticipated rematch, things started off similarly. In fact, Asakura got Rena down quicker this time and looked to have her in real bad trouble and even give her some flashbacks with the back threat.

Rena seemingly learned from her mistakes the first time around and was able to escape and danger in a fun round on the mat.

As the fight went on it was Rena who was looking to strike as that’s what she does best while Asakura wanted nothing to do with it and found her success in the grappling department.

Threatening with armbars all the way to the bell, Rena wouldn’t end up finding the shot to put Asakura away as she took her second career loss.

Here were the rest of the night’s results: