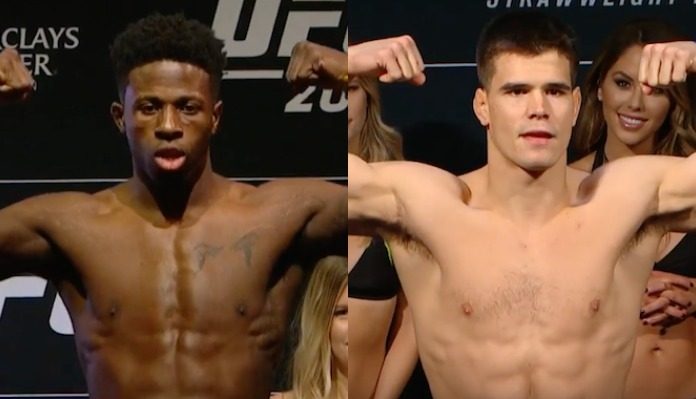 On the undercard of Saturday night’s UFC Lincoln card, welterweight prospect Mickey Gall sought to rebound from the first loss of his career: a decision loss to Randy Brown. He did so in truly emphatic fashion, choking out his opponent George Sullivan just 69 seconds into the first round.

Over the course of his MMA career, Mickey Gall has developed a reputation for his post-fight callouts. Yet while his past callouts of CM Punk and Sage Northcutt were quite clever, his more recent callouts have not been as well-received by the MMA community. His UFC Lincoln callouts generated the most ire yet.

After submitting Sullivan, Gall set his sights on three fighters: Randy Brown, Sage Northcutt (who he has already defeated), and Diego Sanchez (who is currently booked for a fight with Craig White).

Why would u call out a guy u already beat lol

So, wait, he called out a guy (Sage), he already beat? #UFCLincoln pic.twitter.com/do4AwbUxwq

“I want to talk about my next fight,” he told commentator Paul Felder (transcript via Joe.co.uk). “I want to fight in the Garden, I want to go back November 3, Madison Square Garden. Either I want to run it back, the guy I fought there last time [Randy Brown]. I’ll run it back with Sage Corncutt, or I want a legend. I want Diego Sanchez. The Garden. I’m back, baby.”

While Northcutt and Sanchez have not yet responded to Gall, Randy Brown has. From the sounds of it, he’s interested.

“@mickeygall next time @ me bro. I’ll take another easy check tho #UFCNebraska” – Randy Brown on Twitter.

Since defeating Mickey Gall by decision in November of 2017, Randy Brown has fought just once, losing by knockout to Niko Price. He’s 10-3 overall, while Gall is 5-1 in sum.

Does a rematch between Randy Brown and Mickey Gall interest you?