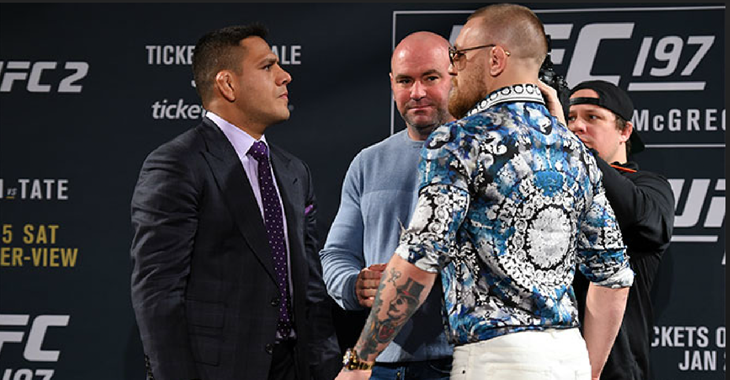 Could you imagine what would have happened if Conor McGregor fought Rafael dos Anjos for the UFC lightweight belt back in March like it was originally planned?

Would Rafael dos Anjos still be holding the lightweight belt with a giant win over “The Notorious”?

Would Conor McGregor be the UFC featherweight and lightweight champion?

McGregor claimed during a UFC 202 media conference call that he would be the first two-weight UFC world champion right now and would still be undefeated in the UFC. However, Nate Diaz stepped in on short notice after dos Anjos pulled out with an injury and handed “The Notorious” his first UFC loss.

Dos Anjos heard what McGregor had to say and fired back at the featherweight champion saying, “@TheNotoriousMMA if You had fought me you wouldn’t be 2 division champ,you would be dead.Look what a out of shape Diaz did to U #I’llbeback”

@TheNotoriousMMA if You had fought me you wouldn't be 2 division champ,you would be dead.Look what a out of shape Diaz did to U #I'llbeback

What are your thoughts on the once scheduled fight between Rafael dos Anjos and Conor McGregor? Is it a thing of the past? Or is it some unfinished business?

Let’s hear what you have to say in the comment section!