There’s only one MMA fighter that comes to mind when you think of powerbombs and chains. Quinton ‘Rampage’ Jackson has been fighting for 18 years and has fought the very best in the UFC and Pride. Amid the busy week of post-UFC 217 reactions, card changes, and injuries, we get hit with another big announcement. Jackson will make his return to Bellator early next year, adding to an ever-growing roster of big names that the promotion has added to their fold.

“I am excited for this new beginning and looking forward to an action packed 2018. I can’t wait to get back in the cage and put on exciting fights for both the ‘Rampage’ and Bellator fans.” – Quinton Jackson via official Bellator press release. 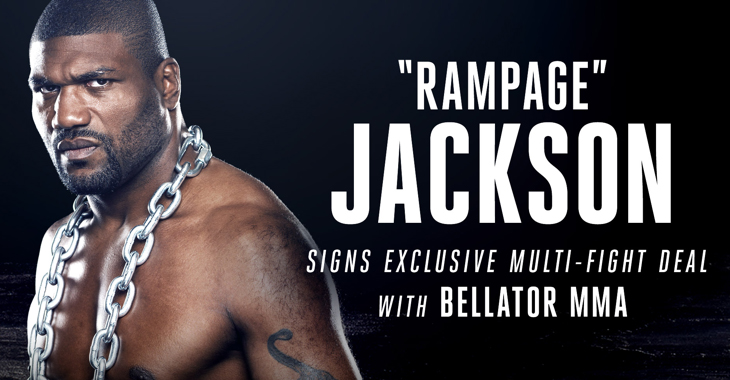 “With ‘Rampage’ Jackson, you know what you’re going to get every time he steps inside the Bellator cage – an exciting fight and interest from fans all over the world. I knew that keeping ‘Rampage’ with Bellator was integral to our continued growth as a promotion and I’m pleased that we were able to come to an agreement that allows us to plan some great future match-ups for him.” – Bellator President Scott Coker said via official press release.

In the last four years, including four wins in Bellator and one win in the UFC, Quinton Jackson has only lost once to longtime rival Muhammed “King Mo’ Lawal. It seems like those two finishing their trilogy together would be a safe bet, but Jackson being signed to a mult-fight deal opens up a ton of possibilities.

Scott Coker has mentioned planning to crown a heavyweight champion in 2018 and Jackson could certainly fight at either light heavyweight or heavyweight. Fedor Emelianenko and Quinton Jackson could be a huge Bellator fight, giving fans of Pride a shot of nostalgia along with a fight that’s almost guaranteed to end in a finish. The official date, card and opponent has not been announced yet, but we’ll report more as the specifics are released.