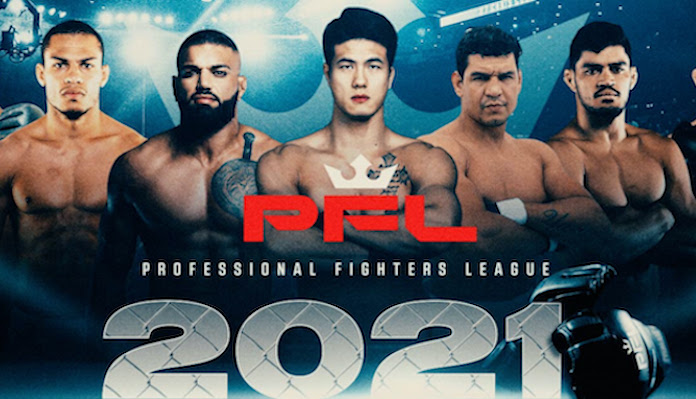 The Professional Fighters League (PFL), has announced a host of exciting free agent signings for its 2021 season.

The PFL, a fast-rising mixed martial arts promotion that features a one-of-a-kind regular season, playoffs, and championship format, announced its newest signings in a press release on Wednesday.

Recently signed for the 2021 PFL season will be Cezar Ferreira, Renan Ferreira, and Sheymon Moraes of Brazil, Joilton Lutterbach and Hatef Moeil of Germany, Marthin Hamlet of Norway, Sung Bin Jo of South Korea, and Brandon Sayles of the United States of America.

UFC fans will certainly recognize some of those names, as Cezar Ferreira and Sheymon Moraes have both previously competed in the Octagon. The other new PFL signings, meanwhile, all boast impressive professional backgrounds, carved out against solid opposition.

“We are extremely excited to welcome a diverse group of world-class talent to the Professional Fighters League as part of the 2021 roster,” said Ray Sefo, President of the PFL. “The addition of elite competitors from countries such as Brazil, Norway, South Korea and Germany is representative of PFL’s global reach. We look forward to seeing what these fighters can do on the biggest stage, as they look to advance through a Regular Season, Playoffs and Championship and earn a title and million-dollar prize.”

“PFL is a global brand with distribution to over 160 countries, and top talent from around the world are recognizing the unique opportunity PFL provides in terms of competing on the biggest stage, against the best competition, for an equal shot at a title and life- changing money,” added Peter Murray, CEO of the PFL. “We are committed to consistently elevating our roster and we’re excited about the depth of talent that will be on display in 2021. Through PFL Studios and our wide network of distribution partners, we look forward to telling their stories and documenting each individual’s journey to the top of the sport.”

Brazilian middleweight star Cezar “The Mutant” Ferreira (13-8-0) is a 15-fight UFC veteran who earned his way into the company by winning the inaugural season of The Ultimate Fighter: Brazil. The 35-year-old who fights out of Boca Raton, Florida, earned seven of his 13 career wins by stoppage and has beaten big names such as Anthony Smith, Thiago Santos, and Nate Marquardt.

German-Brazilian lightweight veteran Joilton “Peregrino” Lutterbach (34-8-0, 1 NC) is the most experienced fighter on this list, with 24 of his 34 career wins coming by stoppage (12 knockouts, 12 submissions). Lutterbach, who fights out of Dusseldorf, Germany, competed on the third season of The Ultimate Fighter: Brazil, and has won 10 of his last 11 bouts. The former FEN, MFC, and XFMMA champion has his sights set on reigning PFL Lightweight World Champion Natan “Russo” Schulte.

Brazilian featherweight knockout artist Sheymon Moraes (11-4-0) is a UFC and World Series of Fighting veteran who is ready to bring his experience to the PFL cage. Fighting out of Los Angeles, California by way of Niteroi, Rio de Janeiro, Moraes has shared the cage with the likes of former WSOF World Champion Marlon Moraes, Zabit Magomedshapirov, and Andre Fili.

Hard-hitting German heavyweight Hatef Moeil (10-4-0) will be an exciting addition to the PFL’s heavyweight division. Eight of Moeil’s 10 career victories have come via KO, and he has recorded wins over UFC veterans such as Ricco Rodriguez and James McSweeny. Fighting out of Dusseldorf, Germany, the former KOK Heavyweight Champion is currently riding a six-fight win streak.

6-foot-8 Brazilian Renan “Problema” Ferreira (6-2-0) will be bringing size, skill, and power to the PFL’s heavyweight ranks. The Team Noguiera product and former FFMMA title challenger out of Porangatu, Brazil has earned all of his wins via stoppage (5 knockouts, 1 submission), and has won four of his last five contests.

What do you think of these new PFL signings?