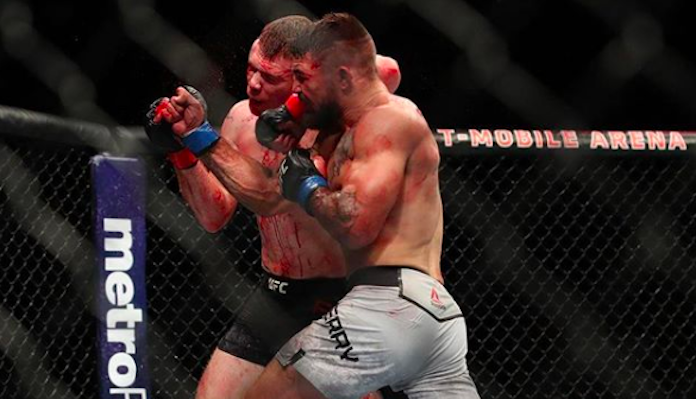 Paul Felder is insanely tough. If there was any lingering doubt about that, he erased it in his UFC 226 fight with “Platinum” Mike Perry.

Not only did Felder, a natural lightweight, go three, blood-soaked rounds with the welterweight knockout artist Perry, but he did so with a badly broken arm.

At the end of the fight’s first round, Felder told his corner that he was worried he’d injured his arm. As it turns out, this was an understatement.

On Thursday morning, MMA manager Brian Butler-Au took to Instagram with a photo of Felder’s post-fight x-ray. It confirms that his arm was most definitely broken. Clean.

One weeks notice, go up a weight class, fight 2.5 rounds with a broken arm… hold my beer. #irishdragon

Despite his remarkable toughness, Paul Felder ultimately gave up a split decision to Mike Perry.

With this outcome, he returned to the loss column after a trio of impressive knockout wins over Alessandro Ricci, Stevie Ray and Charles Oliveira at lightweight. He’s now 15-4 overall.

What did you think of Paul Felder and Mike Perry’s UFC 226 fight? How did you score it?