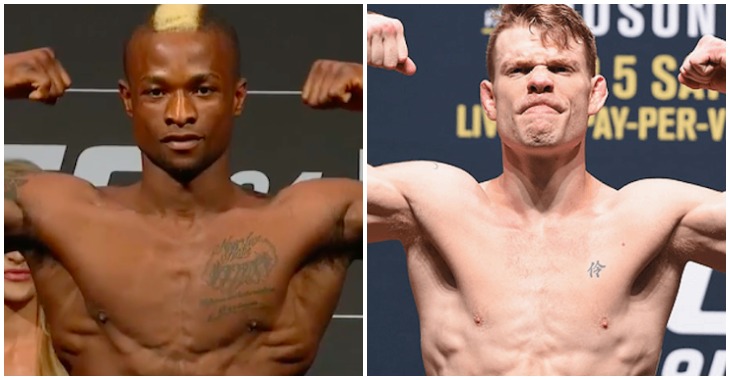 Last weekend, on the undercard of the UFC’s latest trip to London, England, undefeated Congolese-British lightweight Marc Diakiese scored a thunderous, first-round knockout over the game Teemu Packalen. Though Diakiese was already considered a prospect, this win thrust him even further into the lightweight limelight.

Having emerged as a fighter to watch in the UFC lightweight division, Diakiese now has something of a target on his back – as evidenced by the recent callout he received from American striking specialist Paul Felder.

See the pair’s memorable exchange below:

I'm about action not shit talk. U can talk all that shit u want. Sign a contract and I'll be there. #putuporshutup #justletmeknowwhen https://t.co/wj8vaj0BFt

I see you want abit of attention dude, don't worry I'll bring it to you, you've put yourself on my radar.

Let's do it then https://t.co/xA1UpBPkvh

you cowboy wannabe, I'm working on it and I'll see you very shortly.

With his knockout win over Packalen, Diakiese improved to 12-0 overall. His three most recent wins have all occurred in the UFC’s Octagon, where he debuted with a knockout of Lukasz Sajewski, followed up with a decision defeat of Frankie Perez, and then won big in London. Prior to his time in the UFC, the Congolese-Brit tore through BAMMA’s lightweight division.

Felder, meanwhile, last stepped onto the canvas when the UFC returned to Halifax, Nova Scotia, Canada in February. On this Halifax card, he scored a first round stoppage of his own, adjusting Alessandro Ricci’s nose with an elbow and a series of followup punches. Prior to this win, Felder came up short to dangerous Brazilian Francisco Trinaldo. This loss, finally, was preceded by defeats of Daron Cruickshank and Joshua Burkman. The Donald “Cowboy” Cerrone training partner now sits at 13-3 in sum.

At the moment, it is not known whether this fight will actually be booked, but with both fighters riding high off recent first-round wins, the timing does seem perfect.

Who do you think wins a Marc Diakiese vs. Paul Felder fight? Sound off, PENN Nation!