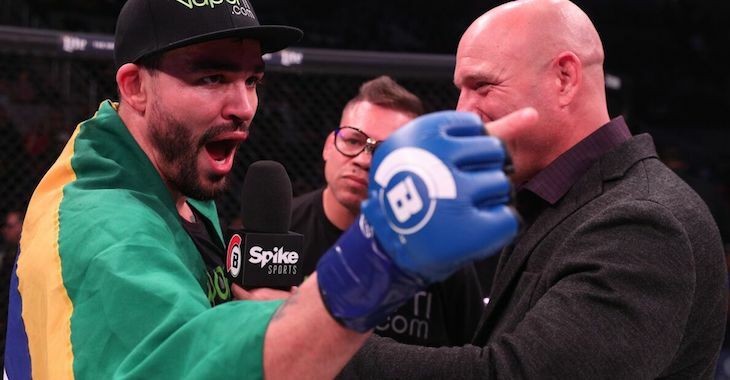 Last weekend, in the main event of the stacked Bellator 183, long-time lightweight contender Patricky Freire picked up an impressive – albeit controversial – win over former UFC and WEC lightweight champion Benson Henderson. Shortly after this win, which registers as one of the best of his career, Freire called for a shot at reigning lightweight champ Brent Primus.

“I want the champion,” he said. “I want Brent Primus. Tonight I took down another former champion and I want my shot at that belt. He keeps running from me but now it’s time. I want that belt and after tonight I earned my shot at it. Benson Henderson is a good, tough fighter, but I’ve got my mind on the division title now. You can’t keep running Primus.”

Shortly after Freire made this callout, Primus seemed to agree to fight him on Twitter.

@PatrickyPitbull congrats on the fight tonight man! You say I ran from you twice? I’ve signed the only contact I got to fight you💪 #ready

Thanks! I have to promote the fight. Let’s do this! Good luck with your baby 👊🏻

While this Primus-Freire fight would certainly make some sense, it apparently isn’t happening just yet. Speaking to MMAJunkie.com at the Bellator 183 post-fight presser, Bellator boss Scott Coker confirmed that the next Bellator lightweight title shot will go to former champion Michael Chandler.

“We’ve been waiting for Chandler to fight Primus again,” Coker said. “(Primus’) wife is having a baby, and we’re very respectful of that. We’re waiting for him, and when he’s ready to re-engage, I think Chandler should be the first one.” Do you think the next Bellator lightweight title shot should go to Patricky Freire or Michael Chandler?