Patricky Freire relishing in underdog status against Usman Nurmagomedov at Bellator 288: “It motivates me a lot”

Patricky ‘Pitbull’ Freire is fine with being the underdog against Usman Nurmagomedov.

The Brazilian is set to make his first title defense tomorrow night at Bellator 288. Freire famously captured the belt in his rematch with Peter Queally last November. In that outing, he won by second-round knockout, finally winning gold after a decade in the promotion.

While the Brazilian is no doubt excited about his first title defense, he has a tall task ahead of him. Standing opposite the champion is the undefeated Usman Nurmagomedov. The cousin of former UFC champion Khabib, the Russian is 4-0 inside the Bellator cage.

Heading into Bellator 288, Patricky Freire is a massive underdog, but that’s something he relishes. At media day earlier this week, the champion previewed his first title defense. Upon being asked about being the underdog, ‘Pitbull’ gave an interesting answer.

According to the lightweight titleholder, he’s been the underdog for his entire career. For his first title defense, the stakes are no different for him. If anything, the doubting motivates Freire. 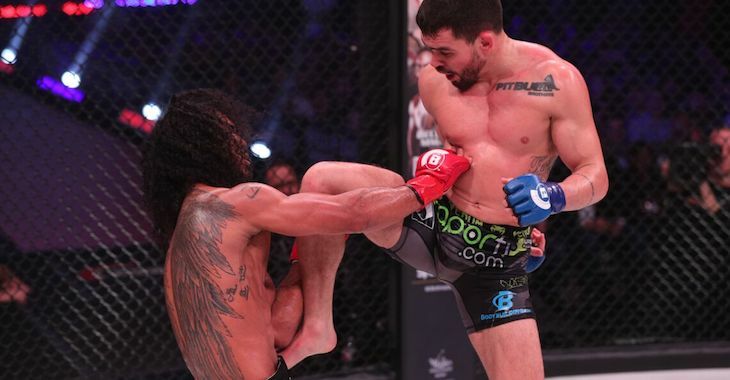 “I like to prove everybody wrong,” Freire stated to reporters at Bellator 288 media day “When I came to Bellator, it was the same for a long time, long years, a lot of years. I was the underdog, I don’t care about this. It is motivating. I want to prove these people wrong. It motivates me a lot.” (h/t MMAJunkie)

He continued, “… [I’ve had] tough opponents from the first fight until now. … My first fight was Rob ‘Razor’ McCullough. He’s a former champ for WEC. Nobody gave me a present like [Nurmagomedov received].”

Bellator 288’s main event features a light-heavyweight title rematch between Vadim Nemkov and Corey Anderson. Their first encounter in April ended in a no-contest due to a controversial third-round headbutt.

The lightweight title bout between Patricky Freire and Usman Nurmagomedov will serve as the co-main event.

What do you make of these comments? Are you excited for this fight? Sound off in the comment section below PENN Nation!

This article appeared first on BJPENN.COM
Previous articleBellator champion Vadim Nemkov reflects on 2015 loss to UFC champion Jiri Prochazka: “Maybe one day we’ll cross paths and fight again”
Next articleIsrael Adesanya says he’ll fight Alex Pereira next, even if the Brazilian loses the belt in the meantime: “I know I can beat him”
© Newspaper WordPress Theme by TagDiv