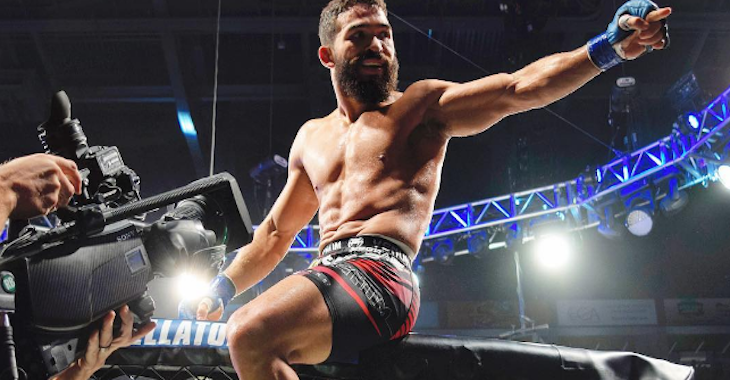 Though the UFC’s trip to Nashville dominated most of the MMA community’s focus over the weekend, Bellator MMA also made a Friday night return to our screens with a very exciting card in Bellator 178.

In the seconds after this emphatic win over his rival, Pitbull leapt up onto the cage, throwing his hands into the air in celebration. It was a pure moment; one of relief, elation, triumph, and celebration. It is also a moment that will cost him.

Shortly after this celebration, Pitbull learned that he was being find $2,500 for climbing the cage by The Mohegan Tribe Department of Athletic Regulation, who were overseeing the fight.

According to Mohegan Tribe regulatory director Mike Mazzulli, who issued a statement to MMAFighting.com over the weekend, Bellator fighters were warned multiple times not climb the cage. Nonetheless, Pitbull is fired up about this fine, telling MMAFighting.com that it feels like fighters aren’t allowed to celebrate anymore.

“Are you f**king serious?” he said. “We aren’t allowed to celebrate anymore? Check Bellator’s Instagram right now and you’ll see a picture of me on top of the cage with thousands of likes. I was living my moment. And look at that, it was great for TV too. The commission should find other ways to make money instead of taking it from the fighters’ pockets and dirtying their names. This is a joke.”

Pitbull is not the only fighter to be punished for celebrating atop the cage recently. Earlier this month, shortly after he snuffed Melvin Manhoef in the main event of Bellator 176, middleweight champ Rafael Carvalho received a $5,000 fine for climbing the cage. UFC lightweight Charles Oliveira was also recently punished for climbing the cage, receiving a 60-day suspension from the frequently criticized New York State Athletic Commission after he celebrated his submission win over Will Brooks.

Do you think fighters should be allowed to celebrate atop the cage? Do you understand Pitbull’s frustration? Sound off, PENN Nation!