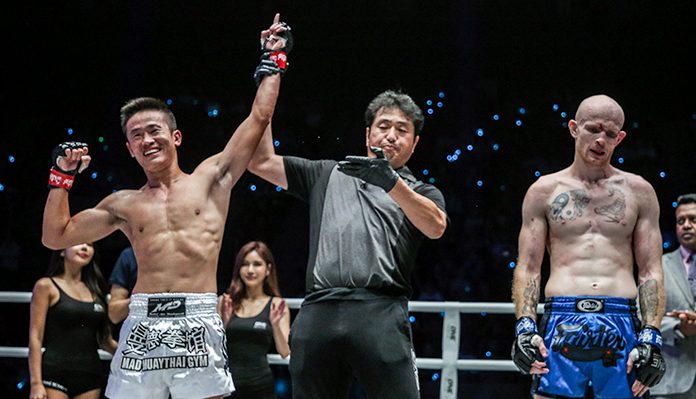 ONE Championship made a successful return to China, with ONE: Legendary Quest selling out the Baoshan Arena in beautiful Shanghai.

The biggest winner of the night was no doubt reigning ONE Atomweight Kickboxing and Muay Thai World Champion Stamp Fairtex of Thailand, who successfully defended her Muay Thai crown against a very game challenger in Alma Juniku of Australia.

While the marquee matchups of the night did not end in finishes, there were more than enough highlight reel stoppages on the card to send the fans in China home happy.

Here’s a look back at the every single stoppage victory form ONE: LEGENDARY QUEST last Saturday, 15 June:

Lethwei specialist Phoe “Bushido” Thaw of Myanmar struck again at ONE: Legendary Quest. The rangy striker continues to use his reach and power to stop opponents, and in Shanghai, he made easy work of Indonesian Victorio “Indra” Senduk and ran his record to 8-1 as a professional mixed martial artist.

Thaw was all action once again as he stunned Senduk with a left hook and followed up with a stunning combination that sent his opponent crashing to the canvas and forced the referee to stop the bout.

Itsuki Hirata announces her arrival with a stunning submission

In her mixed martial arts debut, Japanese judoka Itsuki “Strong Heart Fighter” Hirata forced Angelie Sabanal of the Philippines to tap out to an Americana.

Against a slightly more experienced opponent in Sabanal, Hirata looked every bit like a veteran as she used her crisp striking to light Sabanal up before taking her down and dominating on the mat. The future looks very bright for the “Strong Heart Fighter.”

Yoon Chang Min lights up Trestle Tan in the first round

While he still has quite a long way to go, the young South Korean is showing early flashes of being a legitimate contender in the ONE Championship ranks.

Competing in his home country, “The King Kong Warrior” Fan Rong wasted no time taking his opponent, Egyptian Sherif “The Shark” Mohamed down and punishing him with heavy ground-and-pound strikes at ONE: Legendary Quest.

Fan improved to 12-2 in his professional mixed martial arts career after having put on a show for his countrymen in attendance.

People knew immediately that a matchup between Reinier De Ridder of the Netherlands and Brazil’s Gilberto “Giba” Galvao would be an instant classic, and they were right.

De Ridder and Galvao battled for nearly two rounds at a great pace. However, in the second frame, it was De Ridder who gained an advantageous position. De Ridder controlled Galvao with a D’Arce grip, but instead of going for the choke, De Ridder pounded Galvao with knees.

The Brazilian tried to escape, but after taking three of them directly in the face, he realized he could not break free, and tapped out due to strikes.

Team China came up with the clean sweep at ONE: Legendary Quest and the hard-hitting Han Zi Hao was one of those who came up with a scintillating stoppage win. Han shook off the substantial height and reach advantage that his Scottish opponent Andrew “Maddog Fairtex” Miller enjoyed and out-slugged him in close quarters.

After initially rocking Miller and forcing him into the corner, Han unleashed a barrage of shots that left his opponent dazed and crumbling on the canvas.

Han had fallen short in his opportunity to win the ONE Bantamweight Muay Thai World Championship earlier in the year, but this was an excellent bounce-back performance for him.

What was your favorite finish from ONE: Legendary Quest?