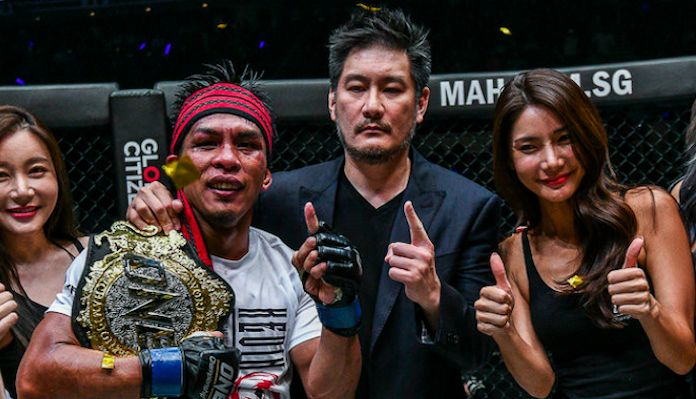 On Friday night in Singapore, (Friday morning in North America), in the main event of ONE: HEART OF THE LION, Filipino spitfire Kevin Belingon ended the reign of longstanding ONE Bantamweight World Champion Bibiano Fernandes with a thrilling split decision victory.

For Belingon, who lost his first encounter with the champion Fernandes by first-round submission, this title victory was a huge moment.

“I feel good,” Belingon said moments after he captured the title. “I feel good because I have the belt. Bibiano is a tough opponent for me but I did what I had to do to win this fight. ”

While Belingon was able to win this fight, it was far from a blowout. Fernandes had plenty of success with his wrestling throughout, and won the fight in the eyes of many fans. That said, Belingon says he was confident he was the winner as the decision was being read.

Kevin Belingon showed mammoth improvements from his first fight with Bibiano Fernandes to this second contest. The most notable improvements to his game were, of course, in the grappling department, as he denied several of the Brazilian’s takedowns and fought off multiple submission attempts.

“We really trained hard for this one, especially on the ground,” he said. “You’ve seen awhile ago that my grappling has improved a lot compared to the first fight time we fought.”

Belingon’s best moment of the fight occurred in the waning moments of the third frame, when he sent the long-time champion careening to the canvas with a rocket-fuelled punch. He feels that, had the round not ended, he might have finished the fight at that point.

“When I knocked him down, it was near the end of the round,” he explained. “There was maybe a few seconds. He was saved by the bell, but he’s really tough. I felt that my punches were strong, but his defense was very good.”

The knockout, of course, was Belingon’s priority throughout.

“I was waiting for the opportunity to knock him out, I was looking for the knockout, but he’s really tough. So, it’s just threw kicks and punches to gain points, because his defense is very good.”

Given the razor close nature of this fight, many fans have already called for an immediate rematch between the two ONE Championship bantamweight stars. While nothing is official to that end just yet, Belingon is open to the idea.

What did you think of Kevin Belingon’s epic defeat of Bibiano Fernandes at ONE: HEART OF THE LION?