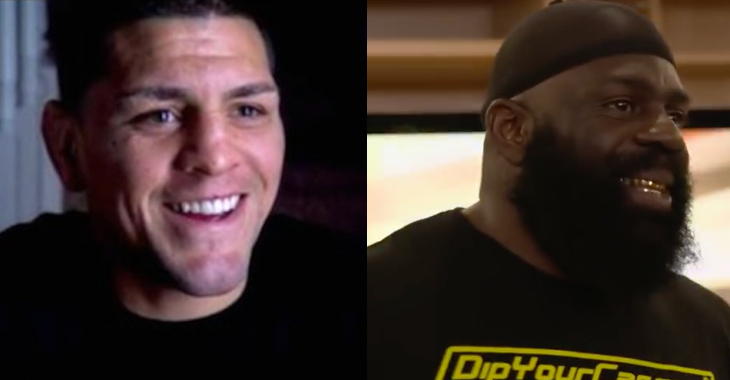 The late Kimbo Slice was a massive attraction with his rise from his viral street fighting videos on the Internet to headlining televised mixed martial arts bouts.

MMA bad boy Nick Diaz recently appeared as a guest on an episode of GGN News with Snoop Dogg where the two talked about mixed martial arts and Diaz’s history. Diaz, who has been known to be an advocate of marijuana, recalled some memories of a few experiences he shared lighting it up with Kimbo back when they were fighting for Strikeforce and EliteXC.

“We was always hanging out at the Strikeforce events or EliteXC back in the day,” Diaz said in the full episode of GGN News (transcribed by Bloody Elbow). “We used to smoke blunts.”

:We would headline the whole show. It was me and Kimbo Slice.”

Nick Diaz is fresh off an 18-month suspension for testing positive for marijuana. Diaz has been eligible to fight in the UFC since his suspension term was up in August of 2016 but hasn’t been in any rush to get back in the Octagon.

BJPenn.com’s Chris Taylor reported that Diaz has turned down fights with Robbie Lawler, Conor McGregor, as well as a UFC welterweight title fight against the current champion Tyron Woodley.

Woodley stated in an exclusive Rapid Fire interview with Taylor that Diaz is holding out for a big payday, which surely would have been the case for a fight against UFC’s biggest draw in Conor McGregor. However, the Stockton scrapper said that McGregor is his younger brother’s fight and that he didn’t want to take it away from him.

Who do you want to see Nick Diaz fight in the Octagon? Play matchmaker and let us know in the comment section!