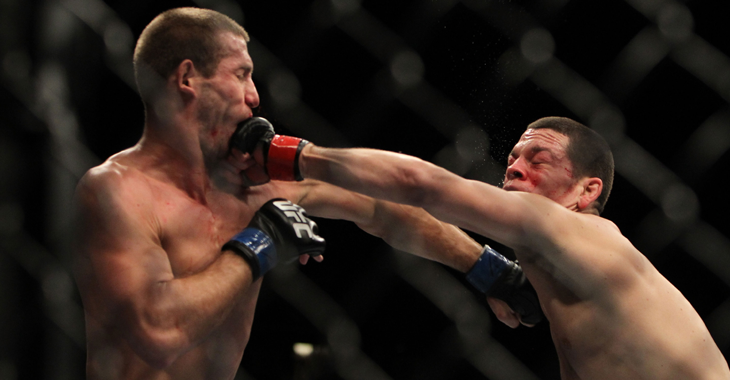 Fan favorites Donald “Cowboy” Cerrone and Nate Diaz met in the center of the Octagon back in 2011.

Despite their rivalry with one another and Diaz taking a unanimous decision win over Cerrone at UFC 141, “Cowboy” says that he actually likes the Diaz brothers because they are so true to themselves.

“You know what? As much shit as he talked… I like those guys,” Cerrone said on an episode of the “Joe Rogan Experience (transcribed by MMA Fighting). “I really do. Because there is no front on them at all. What you see is what you (get). Like, if I were to run into the Diaz Brothers out in the street, we are fucking throwing down. And there’s no question. That’s just who they are. So it’s not like they put on this front, this persona that they’re big (and) tough.

“No, that’s who they are. Twenty-four seven. And it’s awesome to me.”

Cerrone also added that fans of Nate and Nick are just like them and stick by their side because of their authenticity, while surely not forgetting to remind him of his fight which Diaz took it to “Cowboy.”

“The Diaz brothers have the most incredible following,” Cerrone added. “Almost as incredible as the Conor McGregor following. The cult is unbelievable. They just tell me all the time, ‘He’ll beat your ass again!’ ”