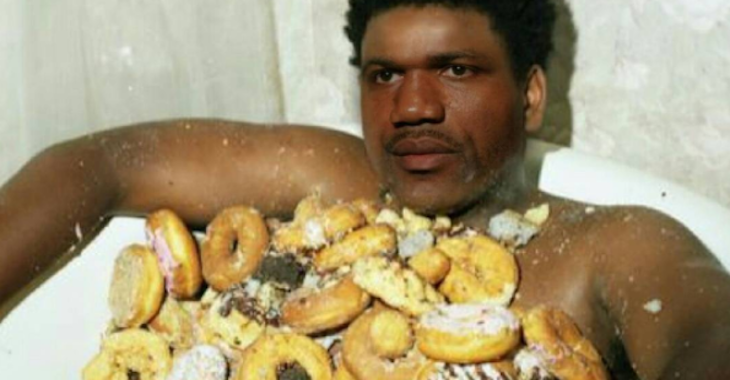 Back in May of 2014, light heavyweight legend Quinton “Rampage” Jackson defeated Muhammed “King Mo” Lawal with a contentious unanimous decision. Last weekend, during the Bellator 170 broadcast, it announced that the two fan favorites will rematch at heavyweight in the main event of Bellator 175 on March 31.

Rampage and King Mo’s trash talk began almost immediately after this rematch was announced. During the Bellator 170 post fight press conference, King Mo tore into Rampage for his weight, saying he looked pregnant, and criticizing his recent training.

In the days since then, King Mo has continued to roast Rampage for his weight, posting a procession of seven hilarious edits of the Pride legend’s head photoshopped onto far heftier bodies. See them all below:

The fight is now in jeopardy. Quinton was offered a role in the Fat Albert remake. @jingleston made this.

Quinton was takin the Fat Albert remake serious. @jingleston made this.

Quinton with his trainin partner and mentor Kobayashi. @jingleston made this.

Throwback Tuesday!!! My boy found a pic from Quinton's audition for Big Momma's House. There is a picture of when he auditioned to play Rasputia in Norbit. My boy @iamwomack dug this one up.

Pix from Quinton's audition as Rasputia for Norbit. #howyoudoin

When we last saw King Mo in action, he was knocked out by heavyweight legend Mirko “Cro Cop” Filipovic in the Rizin Fighting Federation ring. Prior to that loss, Mo scored a decision win over Satoshi Ishii, and lost a close decision to Phil Davis. This loss to Davis was proceeded by a strong seven-fight win-streak, highlighted by wins over Cheick Kongo, Linton Vassell and Jiri Prochazka. He’s currently 20-6 in sum.

Rampage, on the other hand, was last seen in action in June, when he scored a controversial win over Ishii. With this win, the Pride veteran extended his win-streak to five, having recently defeated Fabio Maldonado, King Mo, Christian M’Pumbu and Joey Beltran. He’s currently 37-11 overall.

Who do you think wins this King Mo vs. Rampage rematch? Sound off, PENN Nation!