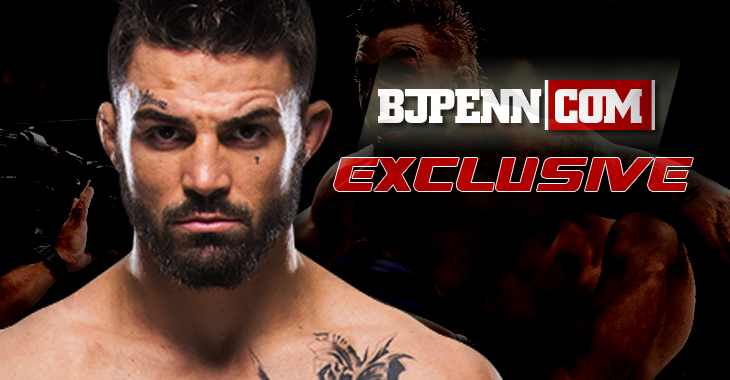 Despite high-profile names like Robbie Lawler and Rafael dos Anjos headlining the card, Mike Perry has enjoyed his shine in the spotlight leading up to UFC Winnipeg. He’s talked about his eye poke defense training, had a tense and strange staredown with opponent Santiago Ponzinibbio, and even belted out his own wild version of a Christmas favorite. He hasn’t stopped there. Before he steps into the Octagon on Saturday, he sat down with our own Chris Taylor for an exclusive Platinum interview.

What’s his mood like ahead of his fight tomorrow:

How he sees his fight with Santiago playing out this Saturday:

“I am coming for that first-round knockout. The way the game plays out you know, you go out there and you be technical and do what you gotta do. You just try and touch him and draw the knockout in. Based on the faceoff (earlier today) he didn’t seem to excited to get in there and fight. Based on all of the hype of the fight, I am very excited and I want to get in there and stand in the middle and just stand still and punch each other in the face. You know, see who goes down first. But, he looks  like he wants to game-plan or try and stay calm.  Maybe it’s just his weight cut that is killing him and he just doesn’t have the energy to freak out. I’m full of energy. Imagine how I am going to be when I eat tomorrow! I am going to be unbelievable and unstoppable. It (the knockout) can happen at any time, but I am hoping for a good fight though.”

If he plans on calling out any fighter in if he wins at UFC Winnipeg:

“Everybody wants to fight ‘Platinum’ Mike Perry! Everybody wants a piece of this because they know what  I am doing and that I have the talent to accomplish the goals that I am trying to accomplish. I am looking for an opponent to step up and fight me in Orlando at the Amway Center. I want the UFC to make that happen.  I am going to get my boy Abe here to make that fight happen in Florida, in my home, my hometown where I live in Orlando. We would sell out. The UFC is going to London in March, me and Darren Till definitely want to fight. I’m focused on Santiago Ponzinibbio this weekend. I am looking to perform and put on one of my greatest performances to date. And with that said, when that victory comes, we are looking to celebrate until the end of the year and then wait for what calls come in. I’ll fight anybody, at anytime, anywhere and they know that. So whatever fight they want to make happen. Maybe a fight that gets me to be the coach on the ultimate fighter. That definitely would be a dream come true. Anything can happen.”

On the UFC Winnipeg main event between Robbie Lawler and Rafael dos Anjos:

“Well, let’s see what happens.  They try and act like they are not looking behind them. You know, I was talking with Danny Roberts earlier and he’s like ‘there is a couple of groups now’. He said there is the young up and comers who are killing it, and then there is the old guys who are trying to maintain their spot and act like I’m not coming up and killing it. They will try and act like it is not a fight that is on their radar. They will try and act like that fight shouldn’t  even be on their mind and that they are looking towards bigger and better things. But the welterweight division right now is crashing towards that belt. There is ten good fighters, that are in the top ten, who are looking for that belt. Each and every month the welterweight division gets bigger, stronger and better. That just excites me even more because the tougher the competition, the better performance you’re going to see from me.”

Who Mike Perry thinks will win between Lawler or dos Anjos:

“It’s fifty fifty. I  believe that Robbie could win. I believe that Rafael could win. I am picking Rafael to win because he is the smaller welterweight and I believe that speed kills. But we will see. If Robbie can take it, that is even if he gets hit. He is bigger and he is going to be stronger (than RDA). He is the biggest welterweight Rafael has ever fought. Well, Neil Magny is taller but he has chicken legs. So, he (Robbie) is the biggest  welterweight that Rafael has ever fought. I am interested in seeing what happens. It is an exciting fight. I understand why it is main event. But we are working towards main events and everybody is talking about my fight. Because of me! Not because of ‘Ponzy’, they are talking about it because ‘Platinum’ Perry is here. Everybody wants to fight me because they know that when my name shows up, everybody is tuning in!”

Why casual fans should make sure they tune in and watch his fight with Ponzinibbio:

“Good drinks and good times. I was just looking at my girl taking a sip of her mimosa and I’m thinking wow what a great life she has. Coming around with me just watching all the fights, just sitting on the side and nobody punches her in the face. I mean she spars and stuff and I sometimes hit her in training when she  is holding mitts and stuff. I mean she gets busted lips and stuff from helping me train. But it’s just a great time you know. If you don’t like fighting then I don’t  know what you’re doing with your life. It is the greatest sport in the world. There is no higher level of competition. And that is all I am. I am a competitor and I am trying to show you an art form. I can make a beautiful painting with the blood of a man’s body! All over the canvas baby, let’s do it!”

You hear that Penn Nation? Mike Perry promises to Jackson Pollock the canvas at UFC Winnipeg with the red stuff. With every single one of Perry’s wins being finishes, it’s easy to believe what he says and why people should be tuning in to see him throwing down tomorrow. Before peacing out, Perry said he’d be UFC champion in 2018 and gave a big shout out to BJ Penn himself.

“Thank  you BJPENNDOTCOM! Thank you my boy Chris. Shout-out to BJ, we did a little Facetime earlier and that was surreal man. That makes me feel even more like I’m just going to murder this man. I say that in the nicest of ways.  You know, he will probably live.”

Was on FaceTime with @bjpenndotcom ! So dope ! I’ll be heading to Hawaii soon ! pic.twitter.com/xbDVMJJgVH