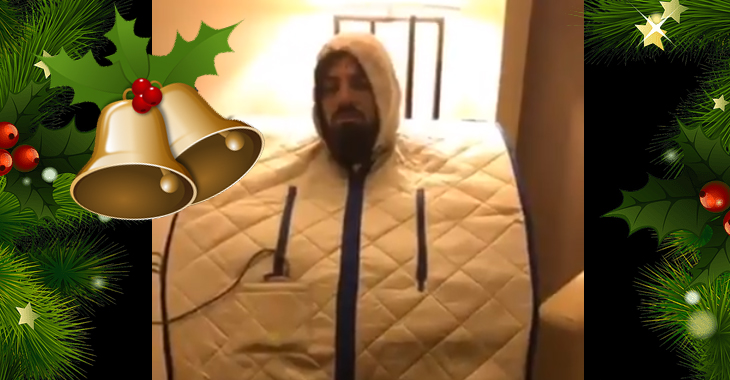 Ladies & Gentlemen we give you Mr Mike Perry at his finest… This clip of his Facebook Q & A in a portable sauna suit is the only video you need to watch today!
😂😂😂👏 👏👏

Perry vs Ponzinibbio goes down this Saturday at #UFCWinnipeg 🇨🇦 !
🔥🔥🔥#UFConFOX26 pic.twitter.com/4ZAEwXeZmO

Mike Perry has been in top form this week. A day from now, he’s going to fight Santiago Ponzinibbio and he told media he’s been specifically training for eye poke defense. If that’s not enough, he had one of the most strange and tense staredowns from recent memory yesterday, which contained Karate Kid references and a Kamehameha from Dragon Ball Z. To top it all off, Perry rattled off a profane rendition of ‘Jingle Bell Rock’ while encapsulated inside a sauna suit cocoon.  …This is a version you shouldn’t teach your kids.

“Jingle bell, jingle bell, jingle bell rock. Your mom sucked my c-ck. She might did a lot. What you know about that? I’m the motherf-cking man and I’m getting paid more than you can. Cause I f-ck motherf-ckers up with my hands. I beat their ass quick and they cut me a check and I spend it on my chick. So, I can’t wait to eat some chicken nuggets. Dip that sh-t in some ranch and drank some orange juice, man. I’m so f-cking hungry and I’m so f-cking thirsty. I’d love to have some water but I gotta’ wait until the morning. How you guys like that sh-t? Remix motherf-ckers.” — Mike Perry from a live Facebook Q&A.

Someone please rip the audio to this and set it to the actual song. This could be a hit single. This should be his walk-out music. Mike Perry is the MMA’s wildcard that they need to keep playing over and over again. All of the fun and games aside, he still has a big fight ahead of him this weekend. Oh yeah, about that. His prediction for Saturday night? “I already said I’m going to powerbomb this motherf-cker like an Orca.”