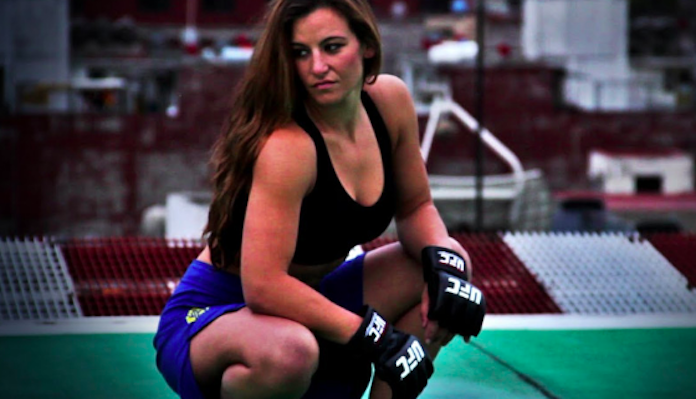 Former UFC women’s bantamweight champion Miesha Tate, who retired in the cage after a November, 2016 decision loss to future title challenger Raquel Pennington, says the door on her fighting career is not 100% closed. That said, the former champ and new Mom doesn’t expect to ever compete again. She explained why on MMA Tonight on SiriusXM Rush.

“Different times of your life evoke different emotions and if the passion returns and the stars aligned, sure there’s a chance [I’d come back], but when I think about it now, I don’t feel like I’m missing something,” Tate added. “[I have a daughter now], and she’s obviously my number one priority and my number one objective.”

“With everything being considered, I don’t think [coming back] is the route that I’m gonna go. But life is crazy. I didn’t think that I would be with such a wonderful man now, and a mother, and I didn’t know I was going to retire when I retired. I very much live by the way my heart tells me to go and when I retired I knew that my heart was telling me this was no longer an option for me.”

So, it sounds unlikely Miesha Tate will join the likes of Chuck Liddell and Tito Ortiz in the pool of fighters to end their retirements and return to competition. Time will tell if recent retirees Michael Bisping, Rashad Evans and Johny Hendricks stick to their retirement plans.

Do you think we’ll ever see Miesha Tate fight again?