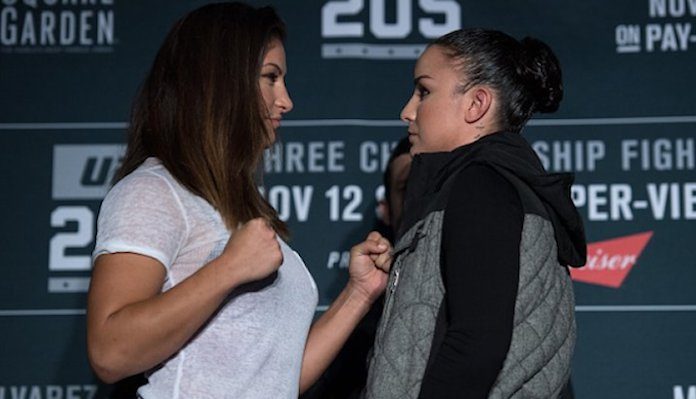 On Saturday night, in the main event of UFC 224, Raquel Pennington failed to capture the UFC women’s bantamweight belt from Amanda Nunes, succumbing to a volley of fifth-round strikes. Unfortunately, Pennington’s title bid was also steeped in controversy, as her corner encouraged her to return for a fifth-round after she told them she was “done” between the fourth and fifth frames.

In the wake of this controversy, many fans, pundits and fighters have berated Pennington’s corner for their choice to force her off the stool after she told them she was done. Not everybody, however, feels the fighter’s corner made an error.

In the opinion of former UFC women’s bantamweight champion Miesha Tate, the actions of Pennington’s corner were justifiable.

“I think that I would’ve done the same thing if I was in her corner’s shoes,” Tate said during an appearance on Sirius XM Rush post-fight (transcribed by Jed Meshew for MMA Fighting). “It’s important that a fighter loses with dignity, and I think that Raquel lost with dignity. She went out there and she got finished. She went out on her shield. I would have done the same thing because sometimes when you’re tired and you don’t think you have enough left, your coach’s job is to pull the most out of you and I think that’s what the corner was trying to do – not let her give up on herself, get her back in the game mentally. She lost, but she went out there. She could have quit at any point if she felt like she couldn’t hang in there. She got finished, and I would have done the same thing.”

“I think he didn’t want to let her give up on herself in the fifth round,” Tate continued. “She’s very durable and she’d been doing really well up until that point – not necessarily winning but she wasn’t out of the fight. I think she deserved to not give up on herself, to go out there and try to win that fight. It didn’t work out that way but it could have. She could have gone out there and done something incredible that fifth round and been like, ‘Thank you, coach. You’re a genius for not letting me give up in that fifth round.’”

What did you think of Raquel Pennington’s corner’s decision to let her return for a fifth round at UFC 224?