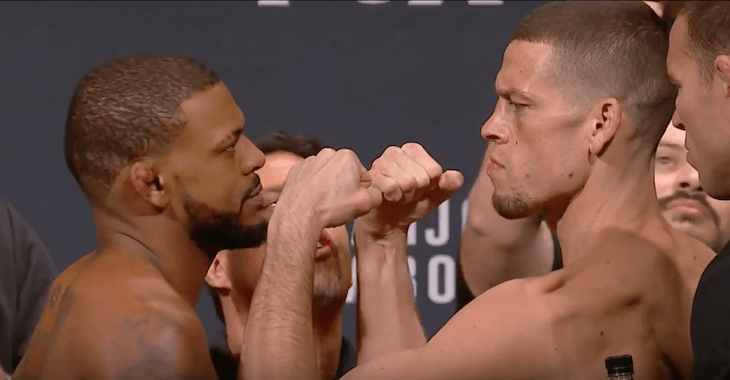 This year, Nate Diaz has made millions of dollars of the course of two welterweight bouts with Irish Superstar Conor McGregor. Of course, Diaz didn’t just stumble into these lucrative bouts. He demanded them in a profanity-riddled diatribe after a 2015 decision victory over Michael Johnson.

This past weekend, Johnson returned to the win column with a beautiful knockout win over the streaking Dustin Poirier. On the heels of this win, Johnson appeared on The MMA Hour to weigh in on the victory, the state of his career, and perhaps most interestingly, the massive success Diaz achieved after their fight.

“It didn’t really piss me off, it just rubbed me the wrong way, ‘cause I felt like a stepping stone,” Johnson said of Diaz’s newfound superstardom. “You know, I was like ‘shit, he just beat me and now he’s fighting for this amount of money, he’s getting all this fame now… But Nate’s been around for awhile man, he’s a veteran of the sport. He deserves everything he’s getting right now, my hat’s off to him, and it’s good to see these guys succeeding the way [he and McGregor] are.”

“I was happy for him. I was a little pissed off, because I felt like it I lost focus in our fight, and I like was ‘man, that could have been me, that should have been me in that fight making that amount of money, and who knows what would have happened to my life and my career right now’.” While he is admittedly a bit envious of Diaz’s recent success, Johnson also made no excuses for his loss, saying he made the mistake of underestimating a Diaz brother.

“He’s one of the best in the world for a reason and I was just off a little bit that night,” he continued.

Though Johnson does feel he deprived himself of some major opportunities by losing to Diaz, he’s also optimistic that he too will have his time in the spotlight.

That being said, Johnson isn’t willing to wait around for his chance to shine. He’s ready for that chance now.

“I want my rematch [with Diaz]. I want my money. I want these big money fights, and I’m here to show the world that I’m not to be joked around with in this division.”

Were you impressed by Johnson’s knockout of Poirier? How do you think he’d fare in a rematch with Nate Diaz? Sound off, PENN nation!