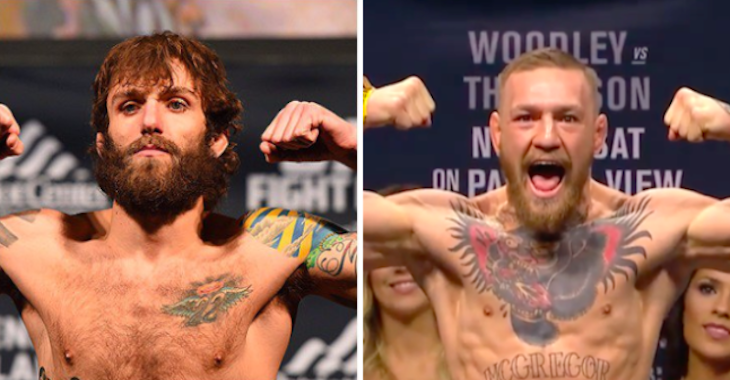 Earlier this year, The Ultimate Fighter 8 winner and current lightweight contender Michael Chiesa made headlines by claiming that he could defeat UFC lightweight champ Conor McGregor.

“Conor is good, but I really don’t think he’s a true lightweight,” Chiesa told ESPN back in January. “That’s what I’m saying. With the landscape of this division, I don’t see Conor ending his year as champion. And you put me in there, I’m going to drag him to the ground and beat him too. I’m a huge lightweight. I’m as big as Nate (Diaz) or bigger, and we saw how many problems Nate gave him.

On Wednesday’s edition of BJ Penn Radio, Chiesa reiterated these claims, telling host Kinch that he believes he’s a bad matchup for McGregor.

Chiesa then explained that, while he thinks McGregor is a great fighter, he’s not a big fan of the Irishman’s personality.

Michael Chiesa has been on the shelf since April of 2016, when he tapped Beneil Dariush with a  second-round rear-naked choke. Prior to that win, he locked up another rear-naked choke on Jim Miller, and defeated Mitch Clarke by decision.

Conor McGregor, meanwhile, was last seen in November, when he knocked out Eddie Alvarez to win the UFC lightweight title. Currently, he is enjoying a paternity leave as he prepares for the birth of his first child.

How do you think a Michael Chiesa vs. Conor McGregor fight would go? Sound off, PENN Nation!