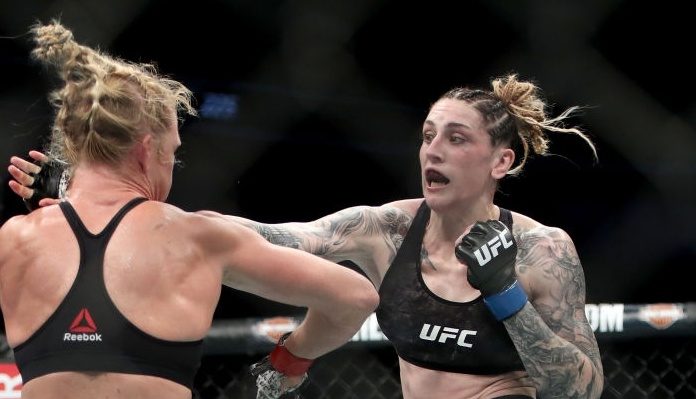 UFC 225 was one of the year’s most highly anticipated cards and for good reason. It was stacked from top to bottom with talent and name value galore.

Among the many names that fought in Chicago was the debuting former Invicta FC featherweight champion, Australia’s Megan Anderson.

Anderson has solidified herself as one of the best 145ers on the planet and her arrival to the ultimate MMA proving ground was long awaited for all who were paying attention to the division where the spotlight firmly belongs to Cris Cyborg.

In her promotional debut, she would take on the boxing legend and former UFC bantamweight champion Holly Holm.

Unfortunately for Anderson, the outcome would result in the third loss of her eleven fight career and her first in four fights (a winning streak that consisted all of knockouts).

This past Saturday at UFC Lincoln, Anderson was in attendance and took some time to speak with the media (via CageSide Press) about her last fight for the first time since it took place.

“I was happy with my performance. Obviously, not the result that we wanted. But I’m a big believer, and my team is a big believer, that every opportunity is an opportunity to learn and develop. We definitely have a lot to work on, but I’ve only been in this sport for five years, and the fact that I’ve gotten to the point that I am in five years, I’m kind of excited for the next five.

I think Holly and her team had a great game plan. That’s the way to beat me, or it was the way to beat me. They stuck to the game plan, and it worked and she was able to execute. It’s the whole name of the game. She did what she had to do to get the job done. And we’ve identified the spots that we need to work on and we’re working on that all the time.”

As the fight quickly began to unfold, many were surprised as the heavily striking based fighter Holm employed a ground specific strategy to defeat the powerful and equally dangerous striker in the Aussie.

And regardless of being outgrappled by a striker, Anderson has taken things in stride realizes what needs to be worked on and done to continue her progression as a martial artist.

“I am happy with how I performed. I’m my own worst critic, there’s obviously things that I can do better. I feel like I definitely showed that I belong and think that’s the real important thing.

That’s the thing, people don’t realize that I do have good ground game, I do have good Jiu-Jitsu but it is really hard when someone is just holding onto you. So it’s really hard to kind of like, initiate those scrambles when someone is kind of just holding onto you and not letting you move because they’re just trying to win points. And that’s fine, that’s a great gameplan. It’s MMA, you don’t always have to hit someone to win, you know?

But we’re definitely working on, really it’s more of like sense of urgency. Particularly on the feet once we do enter the clinch and the wrestling stanzas and having a sense of urgency to either…us go for the takedown or creating distance striking and then getting back in.”

Now the question kind of seems to be ‘what is next?’

Which happens to be much more difficult to answer than it should be. The reason for that being because of the UFC’s lack of a featherweight division as Anderson and the champion Cyborg are the only two current featherweights on the roster.

Hopefully, the upcoming season of The Ultimate Fighter (28) which features the 145-pound division will provide some clarity and new names. The season premieres tomorrow on Fox Sports 1.

Either way, Anderson doesn’t want to wait too long and doesn’t care who is standing in her way next.

“I did have a long time off [before this last fight] so I definitely don’t want to go too long without a fight. Fighting is my passion, I love fighting. I definitely want to have a little bit of time too to develop and stuff like that but I would love to fight in Adelaide [on December 2]. I haven’t fought in Australia in four years so that would be an amazing experience for me to go home and fight in front of my family, my friends, my people.

But I honestly will fight whenever whoever. I really don’t care. I just love to fight and wanna book a fight.”