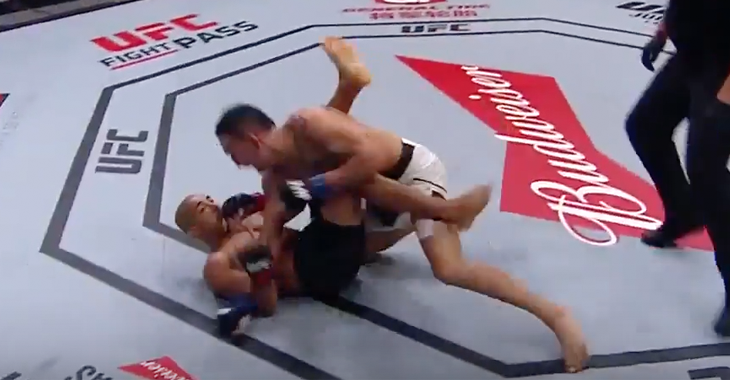 A new undisputed UFC featherweight champion was crowned over the weekend as Hawaii’s Max Holloway defeated Jose Aldo in the main event of UFC 212 in Rio de Janeiro, Brazil.

Holloway scored a third-round TKO victory over Aldo, knocking “Scarface” down and following up with a flurried ground and pound attack where referee “Big” John McCarthy called an end to the fight. Aldo was upset by the stoppage and signaled that it was the wrong call immediately after the fight ended. However, Aldo’s coach Andre Pederneiras believes McCarthy made the right decision in stopping the fight when he did. “He thought Big John stopped it early, but I don’t have the same opinion,” Pederneiras said to Combate (translated by Guilherme Cruz for MMA Fighting). “I’m sure that, when he watches the video, he will change his mind. I saw no way how he would recover in the fourth round after so many punches to the head. It would be hard Holloway not to hunt him after that.”

Pederneiras spoke about what he saw in his fighter’s performance and went over why Aldo didn’t throw many kicks in the fight, which have been a deadly weapon throughout his career.

“Holloway started to feel more confident in the end of the second round,” Pederneiras said. “He was more confident, but Aldo was fine. I said it was 2-0, that he should breathe, and I gave him the instruction about the left hand that was low. It was clear that Holloway’s game was over his low left hand.

“I think Aldo didn’t do some things that we trained, like takedowns, for an example. And when you don’t use all your weapons, it gets complicated. Many people asked why he didn’t kicked, but, considering Holloway’s stance in the fight, there was the risk of Aldo throwing a kick and falling back down.” What do you think will come next for Jose Aldo? Let’s talk about it in the comment section!