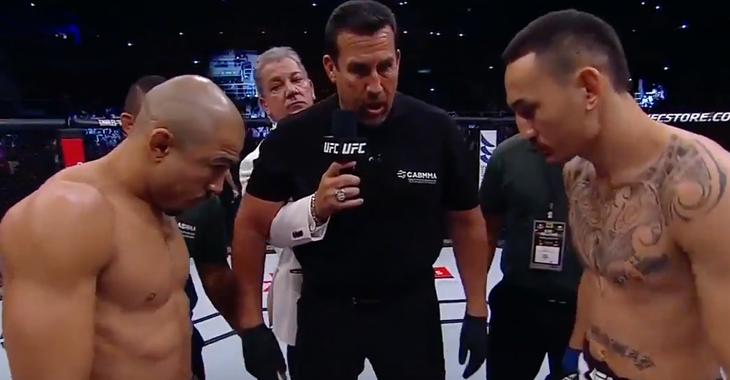 A new undisputed UFC featherweight champion was crowned over the weekend as Max Holloway took a third round TKO win over Jose Aldo at UFC 212.

Holloway played spoiler to the night as he took out Aldo in front of his countrymen in Rio de Janeiro, Brazil.

“I gotta thank Brazil,” Holloway said in the Octagon following his TKO victory. “You guys showed me nothing but love over here. I understand you guys have to cheer on your fellow countrymen but at the end of the day you guys fight fans and I love you for that.”

Aldo did not speak following the loss and was not present for the UFC 212 post-fight press conference. However, on Monday, Aldo released a statement on social media.

“Be content to act, and leave the talking to others” – Baltasar Gracian,” Aldo wrote in his post (translated by The Mac Life). “I only have to thank my ‘dad’ Andre Pederneiras, the best team in the world, Nova Uniao, because if it wasn’t for them I wouldn’t be the people’s champion, and (thank) all my trainers, who did a super well done job and got me ready, and all my fans who are always with me, here’s my love and my thank you. I’m speechless with all the love I’ve received until today, and every word you send to me. Thank you.

Do you think we will see Jose Aldo back in the UFC Octagon soon? Who would you like to see “Scarface” fight following the championship fight loss? Let’s get some names for some potential matchups in the comment section!