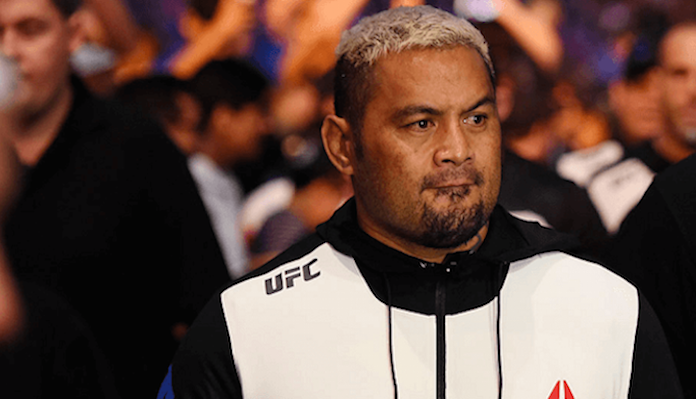 When it comes to Brock Lesnar and people that have been busted for cheating, the ‘Super Samoan’ Mark Hunt is never shy about sharing how he feels.

Hunt and Lesnar fought at UFC 200 in July 2016. The initial result was that of a unanimous decision victory for the former heavyweight champion Lesnar. Shortly after, Lesnar had been notified that he had failed a drug test for Performance Enhancing Drugs thus turning his win into a no contest.

Lesnar hasn’t fought in MMA since then but is planning on making his comeback which he’ll be eligible for in January. Upon his return and despite not officially having a win since 2010, he is expected to get an instant title shot against the current heavyweight champion Daniel Cormier.

“How’s that work? The motherf*cker’s a cheater. How is that controversy? F*ckin’ little c*nt is f*ckin’ cheating, using steroids. F*ck, man, how is that…[you’re] talking ‘a little bit of controversy?’ The f*cking guy is cheating.

He’s cheating and trying to hurt me and you say, ‘oh, we’re going to be nice here’. F*ck that cheater. How are you gonna be nice to the guy that is taking shortcuts, man? Don’t give him that. Why would you want to give him that sort of sh*t? F*ck, they don’t deserve it. You know, all these guys are just shortcut takers, and to me, that’s all they’ll ever be. Nothing else.

Like I said, I didn’t want a lawsuit or a court case against any of these [guys]. I said to Dana [White] already about the sh*t, you know, take that motherf*cker’s money off him. Don’t give it to me, just take it off the c*nt so he doesn’t get nothing. But he wouldn’t have it, so that’s why we’re here now. And with this lawsuit, all I’ve been trying to do is make it an even playing field. It’s not even these guys, these guys are cheating flat out and they’re still getting these opportunities. Why? Honestly?”

As for Hunt himself, he is still competing and trying to stay active. In fact, he faces off against top Russian contender Alexei Oleynik this Saturday in the main event of the UFC’s first trip to Russia for UFC Moscow.

But at age 44 Hunt realizes that his storied career is winding down and it may come sooner rather than later. At least in the UFC.

“After this match, I said to [my manager] Zen [Ginnen] if I can get a match on the Adelaide card [in December] or anywhere or get another match as soon as possible if I’m not injured and then go from there.

I [would] get to fight the same card as Tai [Tuivasa] on the undercard also. It’d be great. It’d be a good send off. It would be me and Dan [Kelly’s] retirement fight, which is great, you know, fighting at home.

It would be my last fight with the UFC. So, it’d be great. I don’t know about retiring per se. It’d be finishing from the big time. And, you know, I wanna fight three more times globally or four. We’ll see what happens for the division and chasing [the belt]. That cut that dream off. So, you know, that’s how it works, but who knows? Maybe [I’ll] retire with Dan Kelly. It’d be fun *laughs*”

The UFC returns to Australia on December 2 for UFC Adelaide. Win or lose, if he’s able to come out unscathed against Oleynik, Hunt very well could get his wish.

Hunt’s last fight came in February in a home game against Curtis Blaydes at UFC 221. Despite some early success, Hunt couldn’t close the show as Blaydes utilized his superior wrestling on route to a unanimous decision win.

But as for Hunt’s next opponent in the Russian submission specialist, Hunt is happy with the matchup.

“Well, I didn’t know much about Aleksei. He did call me out a while ago. I have met him a couple of times, he’s actually a nice guy. I know about his Ezekiel choke. You know, we worked on that, on everything. On my fighting, my guard, my stand-up. So like I said, evolution makes you a better person. If you don’t learn from the same mistakes or someone else’s, then you’re still gonna be losing. So, I look forward to dancing with Aleksei. He’s a nice guy.”