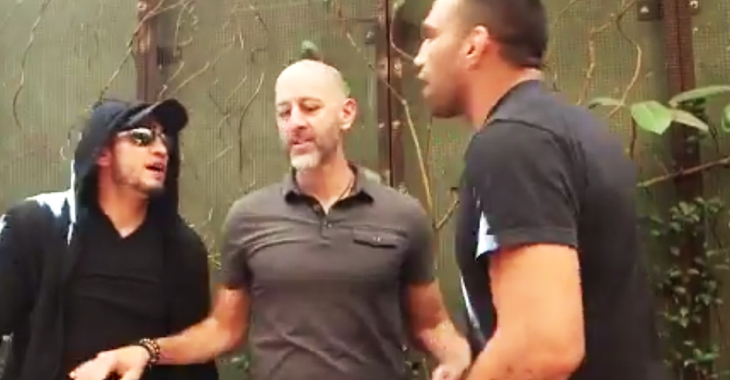 Yesterday during a peaceful media lunch, Tony Ferguson and Fabricio Werdum nearly came to blows. Despite the ridiculous difference — nearly comical — difference in size, Ferguson never backed down from the big man. He even threatened him with an ‘ankle pick,’ which was a great line and a contrast to the foreign obscenities and slurs Werdum threw at Ferguson. None other than Mark Hunt caught wind of the altercation and had to weigh-in on the incident. Given Hunt and Werdum’s past, this comes of no surprise. “Look at this chicken sh-t Fabricio Werdum picking on lightweight Tony “El Cucuy” Ferguson today. Stop hiding from me you bully and pick on me you coward.” — Mark Hunt via his Facebook.

Mark Hunt lost to Fabricio Werdum back at UFC 180 and he’s tried to fight the heavyweight again ever since. According to Hunt, Werdum turned down fights with him for both UFC Japan and UFC Sydney. Both men have fights coming up. Werdum will ironically be fighting the guy who Hunt just knocked out, Derrick Lewis at UFC 216. Hunt will meet Marcin Tybura, who’s on a three-fight win streak, November 19th in Australia for UFC Fight Night 121.

“Nov 19 Fight Night Sydney tried getting someone in the top 5 but everyone is busy. Had asked for [Fabricio] Werdum for Japan and also for Sydney but he is getting a manicure so it’s party time [Marcin] Tybura. […] Thought you wasn’t ready to fight? You’re a true chicken sh-t Werdum. F-cking bum. There’s two things I hate in fighters: Cheaters and filthy dog cowards.” — Mark Hunt via Instagram.