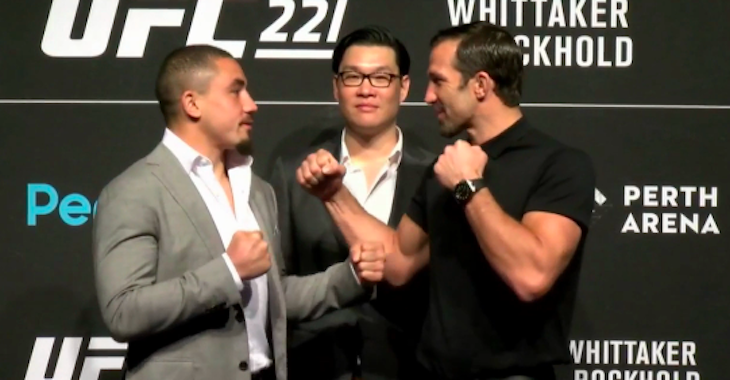 Shortly after winning the UFC middleweight title with an exciting, third-round submission of Michael Bisping, Georges St-Pierre vacated that title, citing ongoing health concerns that will likely keep him on the sidelines for the foreseeable future. Shortly after this development, the UFC elevated its interim middleweight champion Robert Whittaker to undisputed champion.

Whittaker’s first defense as undisputed middleweight champion is now set, as he’s scheduled to take on former champion Luke Rockhold in the main event of UFC 221, which goes down this February 11 in Perth, Western Australia.

Speaking at the first press conference for their anticipated UFC 221 bout, Robert Whittaker and Luke Rockhold both gave their thoughts on Georges St-Pierre’s choice to relinquish the title.

“With the UFC, anything can happen, really,” Whittaker said (h/t Dan Stupp of MMAJunkie). “There was no clear-cut matchup for me at any point in the last six months. So I’m just happy to have closure.”

“I’m just happy to know Georges has stepped down, I’ve taken the title, and I’m going to defend it come February against Luke,” he continued. “So yeah, it’s just good to know what we’re doing. I’m a very objective-driven bloke, so to have a goal in mind and to have something to do is very important to me.”

“It sucks to see what [the UFC] has done with everything, but I’m just glad we’re back on track,” he said. “Like I said, I said Whittaker has been the true champion for some time now, and I’m excited to get in there and mix it up.”

Who do you think wins this Robert Whittaker vs. Luke Rockhold title fight?