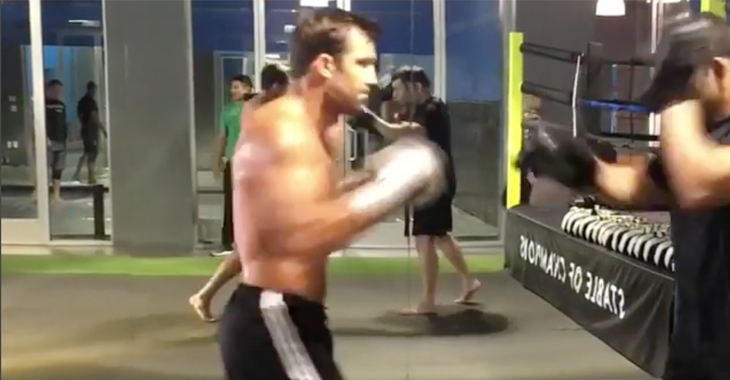 It has been nearly a year since former UFC middleweight champion Luke Rockhold last fought in the Octagon.

Rockhold was upset by current UFC middleweight champion Michael Bisping, losing the UFC middleweight title after getting knocked out by “The Count” in the first round of their UFC 199 championship fight.

With battling some injuries and trying to get his body healthy, Rockhold said that he just started training camp, likely meaning that he has a fight coming up in the near future.

Rockhold posted an Instagram story of him posted up on the shoreline with a caption that said, “Start of beautiful training camp.” Luke Rockhold getting in some kickboxing training with Henri Hooft. https://t.co/HyAQ6Vj7io pic.twitter.com/71JYQBrSRU

Rockhold holds a 15-3 professional MMA record going 5-2 in the UFC. The former Strikeforce and UFC middleweight champion is currently ranked the #2 middleweight in the official UFC rankings falling behind #1 contender Yoel Romero. Right behind Rockhold in the middleweight rankings is Robert Whittaker, who just came off an impressive finish over Jacare Souza.

Rockhold was last scheduled to fight Jacare Souza in the main event of UFC 101, which took place in Melbourne, Australia back in November of last year. Rockhold was forced to pull out of the fight after getting injured and Robert Whittaker and Derek Brunson ended up headling the card where Whittaker ended up winning by TKO in the second round. Rockhold holds a win over current champion Michael Bisping from when they first met in the Octagon at UFC Fight Night 55 back in 2014 and surely would like nothing more than to get a trilogy fight for the title. However, with Bisping set to fight Georges St-Pierre later this year, Rockhold will likely take on another challenge in his return to the Octagon.

Who would you like to see Luke Rockhold matched up with for his return? Play matchmaker and let us know in the comment section who you would have Rockhold fight in the Octagon next!