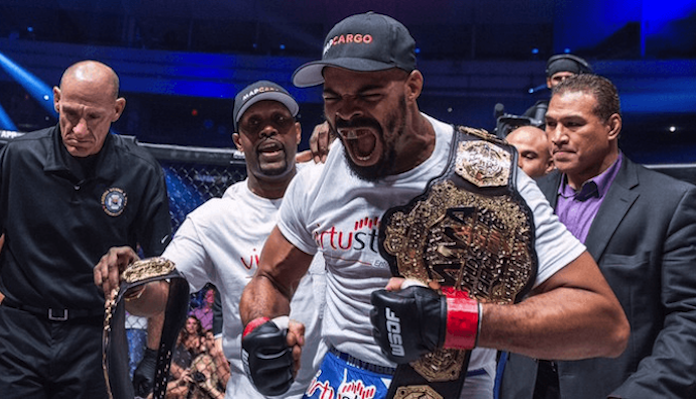 Tomorrow night, on the main card of the UFC’s anticipated stop in Atlantic City, New Jersey, former two-division World Series of Fighting champion David Branch will take on surging middleweight knockout artist Thiago Santos. This bout will serve as Branch’s chance to rebound from a tough loss to former UFC champ Luke Rockhold — a loss he actually feels like he needed.

“I was unraveling a little bit,” Branch told MMAJunkie, discussing his mentality around the time of his bout with Rockhold. “Sometimes it’s a little toxic to not lose in that long. That’s a long time. Having that champion mentality, it just let me know that I need to start over again like I did when I was over there [in WSOF]. It’s a process. I was just trying to replace something that was more ego-driven and me being a champion, I was just coming over here and wanted to be a champion again, just like I was the champ. I just forgot about the process.”

“Totally wasn’t in the right place,” Branch added. “It was mostly ego-driven, it was definitely financial driven, but mostly ego. I just wanted to be champion again. I had my old toys taken away from me and I wanted new toys again. Now I’m just focused, and I’m done with the Hollywood stuff. I just want to do my job and take care of business or Saturday.”

Needless to say, David Branch is keen to return to winning ways tomorrow night, and reassert himself as one of the middleweight division’s top contenders.

“He’s up there with the rest of them,” Branch said of his opponent Santos. “Everyone in the UFC is tough. You wouldn’t get here if you weren’t tough. He’s a big, strong dude. Coming to throw big kicks, big punches. He’s probably worked on a lot of things. He’s probably going to be worried about going down to the ground, but I’m a well faceted MMA fighter. I’m going to use my intelligence in there and I’ll get the job done.”